The Sunne in Splendour 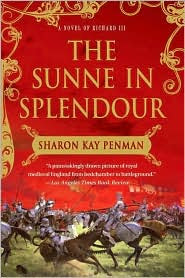 The Sunne in Splendour: "A fascinating portrait of the controversial King Richard III--a monarch betrayed in life by his allies and betrayed in death by history." by Sharon Kay Penman. 1982. 944 pages.

First sentence: Richard did not become frightened until darkness began to settle over the woods.

The Sunne in Splendour is one of the best books I read all year. I started it in July and finished in October: I loved almost every minute of it. This historical novel is just a wonderful, wonderful read. Is it for every reader? At over 900 pages? Probably not. But ANY reader who loves historical fiction, this book is a true must read.

So this novel is about the man who became Richard III. The novel follows him through the decades of his life. And it was quite a dangerous life because of who he was, who his family was. He was of the House of York. And Richard lost many, many family members during the war- for the throne. His brother was Edward IV--and he fought more than once for the throne, for the kingdom. And Richard was always loyal to his brother. Even when he thought his brother was making a few too many mistakes. Still, the two were surrounded by enough traitors, enough men who were ambitious and unwise.

I loved just about everything in The Sunne in Splendour. I thought the characterization was excellent. Penman did a great job in bringing these historical figures to life. And while there were many, many characters to follow, I wasn't overwhelmed. Same with the descriptions. Yes, the book is detailed, and yes, the book is descriptive, but I wasn't bored. The story, the characters, were just fascinating. Which is saying something since  the ending won't be surprise to many! I loved seeing the different perspectives as well. This isn't only Richard's story. Though it is definitely told sympathetically towards Richard.

The Sunne in Splendour was one of those books I finished and knew that I would want to reread again (and again).

Hi Becky, Thank you for the great review. I am a fan of Historical novels and I will definitely look into this book.
I have also started a book review blog and would appreciate if you share my blog link in your blog. It's http://mehdijamei.com and I have added two reviews so far: "The Gospel According to Jesus Christ" and "East of Eden".

Thanks for sharing this one. I like historical fiction a lot but sometimes when there's too much romanance it ruins it for me. I think I will check it out.

I'm so glad you posted about this. Someone gave me this for Christmas last year, but something about the cover made me think I wouldn't like it, so I neve read it. It sounds like I would probably love it.

Unfortunately I have commitment issues and can't possibly commit to a 900 page book. I'll keep it in the back of my mind though.

I loved this book! I really want to read more from her, but just haven't worked her in...

I am putting it on my reading list. Thank you!

This was my first Sharon K Penman book and I loved it so much that I became an instant fan! I haven't read her last couple of books. I need to get back to her!

Hi Becky, I love how you review books! This is a great book (I'm a sucker for all things written by Sharon Kay Penman). I agree - it is certainly worth a reread!

Check out my blog where I have a shout-out to Penman too!

Looking forward to getting some more ideas for my up-and-coming reads from you!