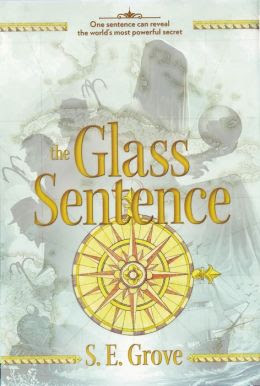 The Glass Sentence has an intriguing premise with incredible potential. As soon as I heard the premise, I knew I had to read it. And, in many ways, it is a premise-driven novel. And there's nothing at all wrong with that, not when the premise is so unique. What is the premise? A Great Disruption occurs (roughly 1799) which fragments time itself. Continents and countries are displaced in time, if you will. So explorers are not just traveling from place to place, but also time to time. It makes exploring even more dangerous and unpredictable. Some societies want to forbid travel between Ages, want to stop foreigners from coming to their land, want to forbid travelers from leaving.

In The Glass Sentence, readers meet Sophia Tims. Her parents are explorers that have been missing most of her life. She has been raised by her uncle Shadrack, a cartologer. He insisted that her parents leave her behind. She was just three. She loves him, she does, but she misses her parents. She holds onto the hope that they'll come back OR that she'll go off adventuring and find them. Shortly after the novel opens, he begins to teach Sophia what he knows. He begins to share his secrets with her; he tells her that there are many different types of maps. That maps can be written on things besides paper. They can be written on glass, for instance, or even water. She's looking forward to learning...

But. Just when it is getting started, Sophia returns home to learn that her uncle has been kidnapped and that his study has been destroyed. Sophia and a new friend, Theo, a former zoo exhibit, team up to save the day. Can they find her uncle? Can they rescue him? Can the bad guys be defeated?

The world building works. It's an interesting and complex world. And, as I said, the premise has great potential. It's just an exciting sounding premise with plenty of appeal.

I liked it. I did. I didn't quite love it as I was hoping. But it was well worth a read.

I love books, shows, movies or anything to do with time travel! Definitely going to pick this book up next time I'm at the store! Awesome review, Thanks!

I saw this book at the library today and now I regret passing it by! I'll have to go back and get it next week. Love reading your reviews!