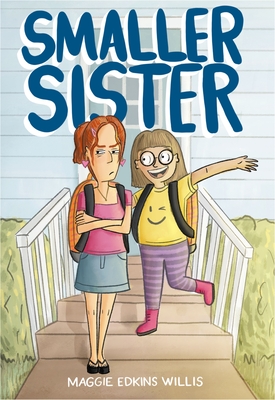 Premise/plot: Smaller Sister is a new graphic novel by Maggie Edkins Willis. Lucy and Olivia (aka Livy) are close in age and sometimes close in spirit. (They even have their own secret code for writing notes back and forth). Smaller Sister is both a coming of age (graphic) novel and a "problem" novel. Though perhaps the phrase "problem novel" is out of fashion??? Olivia, the older sister, has a problem, a big problem. She develops an eating disorder that shakes up the whole family. It isn't just Olivia's problem, it is everyone's. Lucy doesn't know how to process this--to put it mildly. Her *old* familiar Livy seems to have vanished literally and figuratively. Her sister is changing in dozens of ways including physically. But it is the emotional lost-ness that haunts Lucy.

So the book is about the sibling relationship. The book spans perhaps three years give or take. We see glimpses of several grades at two different schools. (Plus one flashback scene at a previous school, I believe). But the book is also about friendship in general. In particular, how TOXIC friendships can be. One can desire a best friend or a good friend so much that one is able to overlook a dozen red flags as to why the relationship may be unhealthy or toxic. Such is the case with these siblings. In particular, Lucy, since we see this through her point of view. There is no quick or easy shortcuts on making and keeping best-best-best friends that will stick with you through thick and thin for better or worse. Lucy's realizations are slow but sure in coming. (Probably VERY realistic. One pep talk probably not going to solve a girl's problems in middle school.)

Plenty of scenes depicting life at home, at school, at the mall, and at camp.

My thoughts: This book tackles a real problem realistically. Eating disorders. Body image issues. Low self-esteem. How so called friends--close "best" friends at that--can pick, pick, pick, pick, pick, pick on you, namely your physical appearance. If a person only can feel good about themselves by putting you down and keeping you down, they aren't really a friend worth keeping. Friendships in middle school especially can lead to DRAMA, drama, and more drama.

Lucy is heading into fifth grade when the graphic novel begins, and by the end of the novel she's in seventh grade, I believe, or heading into seventh grade. Her sister is a grade above her--so sixth grade through eighth grade.