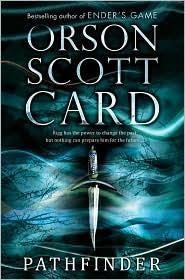 Saving the human race is a frantic business. Or a tedious one. It all depends on what stage of the process you're taking part in.

I loved Pathfinder. I just LOVED it. Why did I love it? Great premise. Great world-building. Great characters. Now, it is the first in a series, I believe, so I think the characters and story will be developed even more in the next one. But. I have no complaints on how they were developed in the first novel.

Pathfinder has two stories to tell. The heart of the story focuses on Rigg, a young boy, who is well-educated for a trapper's son. His father has taken him along on all his adventures, and he's known a very rugged life. Turns out his father has been preparing him for something BIG all along. Something he'd have to face all on his own. But. He's not all on his own. Not for long. For he joins up with Umbo, a childhood friend who has in recent times been less than friendly, but a boy who has a secret destiny of his own. He's been "prepared" by Rigg's father too.

Rigg can see the paths of every human and animal that has ever walked the earth. He can see all paths but for one--his father. Umbo's gift, well, it's a bit harder to define. He can manipulate time--though whether he's slowing or speeding up time is anyone's guess. By working together--and this is found through chance--they can change the past. (And when they do change the past, they often find themselves the stuff of legend.)

Rigg's journey--his quest--is to travel to find his mother and sister. The focus being on the sister. Before his father's death--which occurred just a day or two before--he'd not known his mother was alive or that he even had a sister. But now he has something to do--find his sister, Param--and something to take with him--a legacy of nineteen stones. This journey will be full of danger, but working together they may just survive. Their chances for survival improve even more when they're joined by Loaf, a former soldier turned innkeeper.

Rigg's relationship with Umbo is complicated at best. Because not only did Umbo accuse (publicly) Rigg of murdering his younger brother, the two seem to be in competition when it comes to who-has-the-greatest-gift, and who-should-be-in-charge. Umbo does not want to be taken for granted. He does not want Rigg telling him when to use his gift, how to use his gift, etc. And then there's the fact that Rigg and Param are from the royal family--they may not sit on the throne; they may live surrounded by guards; they may legally 'own' nothing not even the clothes on their backs--but royalty nonetheless.

The second story is equally interesting. It is revealed in the first few paragraphs of each chapter. This story concerns a human captain of a colony ship and a mechanical 'expendable.' Ram Odin is the only human awake for this journey. He's told that he will be the one who determines if the ship makes the jump into the fold so they can travel faster than light to the new planet they hope to colonize. But things don't go according to plan--his plan at least. These portions are SO compelling. I was fascinated by this story. And I couldn't wait for these two stories to start blending together.

I loved Pathfinder. I loved reading this one. It reminded me of everything I loved in Pastwatch and The Worthing Saga. It was so wonderful to be spending time with Orson Scott Card again. I would definitely recommend this one!

Labels: library book, Simon and Schuster, YA Fantasy, YA Fiction, YA Science Fiction

Oh, my gosh! I've seen that book a couple of times but I've never really considered reading it until your review. I'm going to try and find it at my library. Thanks for the review!

I'm looking forward to this one!

great review Becky! I have this in my tbr pile!! I have a better feel for it now, thanks!

I was not a huge fan of Ender... Maybe I will like this series better. I just added it to my holds. I need to give Ender another try eventually. I keep forgetting.