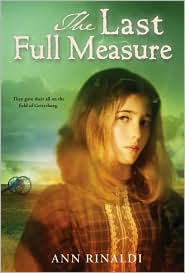 "Where are you going, Tacy?"

Set in Gettysburg, Pennsylvania in 1863, The Last Full Measure is Ann Rinaldi's latest historical novel. It stars the Stryker family. Our heroine, Tacy, is fourteen. She has two older brothers and a father in the war. But during these troubling summer months, she's going to mature quickly. She'll have to having witnessed some of the atrocities of war. When the novel opens, Tacy's biggest problem is her brother, David, the brother who was unable to join the army because of his bad leg. He has been put in charge of the family; it is his duty to "protect" his mother and his sister, and to look after their home. The responsibility weighs heavily on him, transforming him into a man Tacy can barely recognize. Who is this bossy brother ordering her about? Who is this man that shouts and yells and threatens? Though, perhaps, Tacy needs someone to tell her no--for her own sake.

As the novel progresses, readers get a glimpse of the war, the battle as it unfolds. Readers see the harshness, the devastation, the madness of war. One might think that the battle itself would provide the climax of this one. That its darkest moments would be in the battle itself. But. That's just the beginning. And Tacy's darkest days come after the battle.

I found The Last Full Measure a compelling read. I read it in one sitting, in one afternoon. I enjoyed Tacy as a character. I liked her perspective. How she wasn't above questioning the world around her. And perhaps most importantly, how she wasn't perfect.

But it was a difficult read for me. I reached a point where I was like NO! Are you serious?! Why?! And after that point, it was hard for me to "like" this one. I'm not saying it's not a good book. I'm not saying that it isn't realistic. Or that it isn't well-researched. That it isn't true to the times. But still, it didn't go the way I wanted it to go.

This sounds like a book I might read for the Civil War Challenge. I usually like Ann Rinaldi, so your negative comments surprised me - making me all the more curious.

Ann Rinaldi is the author who, I think, helped make me into the historical fiction fan I am today. I didn't know she had a recent book out, so I'll have to put this one on my list. Like Alex, I have to admit that I'm a curious to see what turned you off about the book - guess I'll have to read to find out!

Thanks for the review. We've got it listed on the civil war book review page and will post an excerpt on the main page in February.

I'm dying to jump into this challenge, you've piqued my interest. So many books so little time....

I had the same reaction! I loved Ann Rinaldi's older YA historical fiction novels but not so much her newer middle grades novel. This one was good up until a certain point (you know which one towards the end) and then I was so upset. It ruined the book even though it was realistic.