The Boy Who Couldn't Sleep and Never Had To 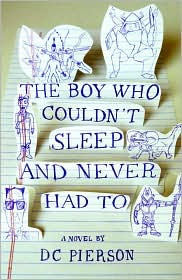 From the prologue: All the newspapers and TV pundits are calling this fall's freshman college class the "Symnitol Generation," but if the activity up and down my dorm hallway is any indication, this fall's freshman college class is the "Stand Around Each Other's Laptops and Play the First Thirty Seconds Of Every Song on the Hard Drive Generation." The noise makes it hard to sit and write this but not impossible.

From chapter one: I've got a system to keep people from seeing what I'm drawing.

I can't say I loved The Boy Who Couldn't Sleep And Never Had To. But I can say it was an interesting read: a coming-of-age novel with a science fiction twist. Our narrator, Darren Bennett, was a loner, a young guy trying to keep his life private. Not wanting anyone to know just how seriously he took his drawing, his stories. But then he meets Eric Lederer, a guy with an even bigger secret to keep, and it just happens that he shares his vision. The two begin working on the project together--creating stories and characters, outlining movies and books, etc. And the two become best friends. Even though Eric doesn't love everything about Darren--his bullying brothers, for example, and his friend's obsession with "his thing." And Darren doesn't love everything about Eric--his friend's reluctance to explore "his thing," and his way of disappearing for a day or two each month. What is Eric's "thing"? Well, it's what the call Eric's big secret: the fact that Eric doesn't ever sleep. He doesn't have to sleep. He has never slept in his entire life. Darren isn't the first person Eric's ever told. But he is the first person who has believed him. And he's the first person to become obsessed with it, to view it as a "super-power." But what Darren fails to realize is just how heavy a burden this "power" is for his friend.

As I said, it's a coming of age novel, so expect angst and rivalry. For what could separate these two friends? Could it be a girl? a drama queen?!

The Boy Who Couldn't Sleep And Never Had To has its moments. I enjoyed quite a few scenes in this one. But--for me--it wasn't quite love. The book had its light moments, its funny moments, it's social commentary. But. I had a hard time believing in the science fiction elements of this one. In Eric's power and ability. And the last third of the novel had me a bit confused--what was real? what was imagined? is Darren reliable as a narrator? are we supposed to like Darren? I do think other readers might like it more than I did.

I do like the cover. It's a bit different from the norm at the moment. Too bad the book itself didn't really work for you!

I like the cover too! Sounds like an intersting premise, and I'll keep my eye out for it, but I probably won't go out of my way to get a copy.