First sentence: In these times of ours, though concerning the exact year there is no need to be precise, a boat of dirty and disreputable appearance, with two figures in it, floated on the Thames, between Southwark Bridge which is of iron, and London Bridge which is of stone, as an autumn evening was closing in.

Oh how I loved Our Mutual Friend! I just loved, loved, loved it! I think reading Bleak House last fall helped prepare me to love it. Because it gave me a good taste for Dickens' style, his narrative techniques, his characterization. It showed me that all would be worth it in the end. Did I struggle with Our Mutual Friend? No. Not like I did with Bleak House. I happened to be in just the right mood, perhaps. But I found nothing dull, nothing lifeless about Our Mutual Friend. Nothing lifeless but the dead corpse discovered in chapter one that is!

How does one begin to describe a novel that is 800 pages long?! A novel that doesn't have one or two main characters--but many. A novel that doesn't have one or two main stories--but many. If you're not familiar with Charles Dickens, you should know that he has his own way of storytelling. His stories and characters unfold slowly but surely. Don't expect to meet all the main characters in the first hundred pages. Or even the first two hundred pages. Dickens won't be rushed. This is something that I have come to appreciate--though other readers may struggle with his pacing. I found it delightful; something to be savored. 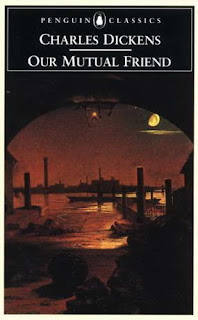 Since I have to start somewhere, perhaps I should start with the corpse. Lizzie Hexam and her father, Jesse "Gaffer" Hexam discover a dead body during their night's work on the Thames. Her father's former business partner, Roger Riderhood, witnesses this discovery and later has some unflattering stories to spread to any willing to listen. (Stories that threaten Lizzie Hexam and her brother, Charley.) The body was soon identified as John Harmon--there were clothes and papers identifying him, I think. His death brings changes to several households. For his intended, Miss Bella Wilfer, it ushers in pitifully insincere mourning. She mourns--but for the riches she would have had if they'd married and he'd inherited his father's estate. But the household that changes the most is that of the Boffins. For Mr. and Mrs. Boffin will inherit the Harmon estate now that the heir is dead. Will money prove friend or foe to this lovely couple? One thing we learn early on, is that Mr. Boffin has a heart of gold--for he opens his heart and home to Miss Bella Wilfer. He also hires two men--two very different men--after he comes into his money: Silas Wegg, a man he hired to read to him, and John Rokesmith, a man he hired as his secretary. Is either man who he appears to be?

What did I love best about this one? The characters? I loved Bella Wilfer, John Rokesmith, Mr. and Mrs. Boffin, Melvin Tremlow, Jenny Wren, Mr. Riah, and Lizzie Hexam. And there were characters that I didn't exactly love--they weren't that lovable, after all--but their scenes were enjoyable nevertheless. The Podsnaps. The Veneerings. The Lammles. The Wilfers. Mr. Fledgeby. Mr. Lightwood and Mr. Wrayburn. Some characters added drama; some characters added humor! 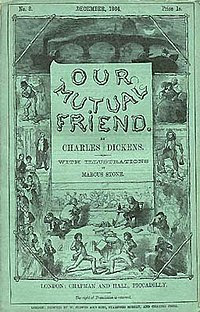 This is what I said in my Bleak House review, but it proves equally true in the case of Our Mutual Friend:

I loved the romances of Bella and Lizzie. The scenes with Bella and her true love made me giddy! And while Lizzie's scenes were a different nature--a bit more melancholy--they were so heartfelt. But it isn't just a romance. There is action, drama, mystery. There are secrets and lies and malicious plotting.

I loved this one. I loved the writing, the descriptions, the characterizations, the storytelling. It's a great, great book.


"Never was an obstinate person yet, who would own to the word!" remarked Miss Potterson, rubbing her vexed nose; "I'm sure I would if I was obstinate; but I am a pepperer, which is different." (74)

"No one is useless in this world," retorted the Secretary, "who lightens the burden of it for any one else."
"But I assure you I don't, Mr. Rokesmith," said Bella, half-crying.
"Not for your father?"
"Dear, loving, self-forgetting, easily-satisfied Pa! Oh, yes! He thinks so."
"It is enough if he only thinks so," said the Secretary. (511-12)

I tried to read this a few years ago and I couldn't get into it at all. I must try again!

This was my second real attempt to read it. I tried several years ago, and it wasn't working for me then. I kept finding reasons not to pick it up, and since it was a library book, I felt bad about renewing it so many times so I gave up. But I was ready for it this time. And we clicked from the first chapter on--which was a lovely surprise. I do think people should listen to their moods--and not try to force things just so they can say they read something.

I just loved this novel too. There are so many similarities with society today - people living on the fringes of sociey, scraping together a living, while some scale the heights of society, marrying for money etc. Dickens is so wonderfully observant. His characters so intersting and unforgettable! Thanks for reminding me just how much this novel has to offer. :)

Great review! I recently finished reading Oliver Twist, and I completely agree that Dickens has to be savored. I think that's why most readers of today find him difficult to read, me included. We're all used to "instant" things that patience, especially when it comes to reading, is becoming a rare thing. :)

It's great to see people reviewing this book~it's so awesome... definitely one of my favourites ^^
And I agree, the book needs every one of the characters, even the minor ones, and the ones that you hate *coughFLEDGEBYcough*...
and, of course, it has the wonderful... Miss Jenny Wren <3 (I'm sorry, I'm rather obsessed ^^")
~Lilii

I was forced to read Dickens at school. Now I'm so glad I was. He is a part of me now and I have just started OMF. I'm hooked already. Now I have some new ideas for characters in my novel. Keep well. James. PS Your website is awesome.