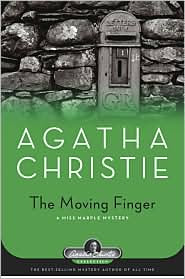 I have often recalled the morning when the first of the anonymous letters came.

Jerry Burton, our hero, has taken a house in the country with his sister, Joanna. He's recuperating from an injury, and his doctor has definitely suggested some rest and relaxation. As for Joanna, she's recuperating from a broken heart. But rural village life isn't as uneventful and peaceful as he expected. For soon after his arrival, an anonymous "poison pen" begins a nasty letter campaign. Which is unpleasant enough, he supposes, but things turn deadly after a woman's "suicide" after receiving a vile letter. The victim leaves behind two young sons, an older daughter from her first marriage, a husband, and a rather pretty governess. Megan, the daughter from the first marriage, soon becomes a major player in this Miss Marple mystery. This "suicide" becomes a bit suspicious when a second death occurs--that of a maid--within the home. The question becomes did this maid--on her day off--see something?

I loved this one. I just LOVED it. It wasn't a purely pleasant read for me. I wouldn't exactly say I was praying throughout, but I was certainly wishful with my repeated pleas, please don't let it be Megan, please don't let it be Megan, please don't let it be Megan. Never have I gotten that involved with a mystery. Who is Megan? For better or worse, she's the young woman our hero described thusly, "She looked much more like a horse than a human being. In fact, she would have been a very nice horse with a little grooming" (17). She's largely ignored not only by the village but by her family as well. But there is something about her that Jerry, our hero, can't ignore. He goes out of his way--time and time and time again--to include her. He even invites her to stay with him and his sister after her mother's death. He is the one person, she's found, willing to listen to her.

While Jerry is making friends with Megan--not always an easy task--Joanna, his sister, is trying to make friends with the local doctor. That is an uphill battle. Joanna has never, ever had to work this hard to get a guy to like her.

So this mystery has a romantic element to it which I just loved. It also stars Miss Marple, though she doesn't enter the case until after the second death occurs. Miss Marple finds Jerry Burton a great help in this one! The details he's observed through his stay, makes solving this one so much easier for her! It gives her quite the lead. But she still has to *prove* it.

The Moving Finger is very compelling! I loved it for so many different reasons.

Emily Barton, I think, has a mental picture of men as interminably consuming whisky-and-sodas and smoking cigars, and in the intervals dropping out to do a few seductions of village maidens, or to conduct a liaison with a married woman.
When I said this to Joanna later, she replied that it was probably wishful thinking, that Emily Barton would have liked to come across such a man, but alas, had never done so. (85)

"The police are doing their best."
"If Agnes could be killed yesterday, their best isn't good enough."
"So you know better than they do?"
"Not at all. I don't know anything at all. That's why I'm going to call in an expert."
I shook my head. "You can't do that. Scotland Yard will only take over on a demand from the chief constable of the county. Actually they have sent Graves."
"I don't mean that kind of an expert. I don't mean someone who knows about anonymous letters or even about murder. I mean someone who knows people. Don't you see? We want someone who knows a great deal about wickedness!"
It was a queer point of view. But it was, somehow, stimulating. (141)

"Yes, it was dangerous, but we are not put into this world, Mr. Burton, to avoid danger when an innocent fellow creature's life is at stake. You understand me?"
I understood. (199)