City of Fallen Angels (YA) 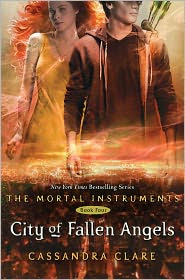 The first three books in the Mortal Instruments series are The City of Bones, The City of Ashes, and The City of Glass. I wasn't anticipating a fourth novel, but, I was pleased to read it all the same! Even though I don't like paranormal romances--romances (dark or light; comic or tragic) that star vampires, werewolves, faeries, wizards, warlocks, demons, and the like, I can't help wanting to follow Clary's story. Or Simon's story. Or Jace's story. I read the first book and I was hooked. (It's a very good thing I read it before I got burned out on all things paranormal!)

The story begins shortly after the conclusion of The City of Glass. Simon is still getting adjusted to his transformation. And it may take quite a while. Because at times Simon doesn't feel like himself at all. And sometimes he can't explain his own behavior, his own desires. And Simon is not the only guy in Clary's life having issues. No, Jace, is having MAJOR issues. He's madly, deeply, in love with Clary. BUT. He's having anxiety issues nonetheless. He's having recurring nightmares about killing his girlfriend. And, of course, he's afraid to talk about his dreams with anyone....

This one has danger, action, adventure, temptation, and plenty of suspense. For fans of the series, I'd imagine it's very satisfying! (I know I enjoyed it!) For fans of paranormal, you should definitely give this series a try. But read the books in order, of course! If you're not a big fan of paranormal romance--if talk of demons, faeries, vampires, and werewolves as love interests doesn't thrill you, then this one probably isn't for you. Not that I'd discourage you from giving it a try--I mean, if you've NEVER tried paranormal romance, maybe you don't know if it's for you or not. For me, I'm glad to keep in touch with these characters even if the genre itself doesn't thrill me.

Labels: 2011, library book, Simon and Schuster, YA Fiction, YA Paranormal, YA Romance

I enjoy some paranormal romance novels. But the market is so saturated with them, it's good to hear about a good book for people to read though.

I really enjoy this series and I'm excite to read this one! Glad to know that as a fan of the series you enjoyed it.