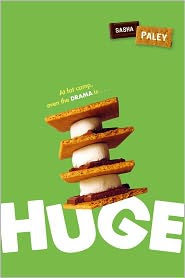 Huge is the story of two girls at fat camp. Wil Hopkins who is understandably angry, bitter, rebellious, and generally unpleasant to be around, and April Adams whose issues may be a little less obvious. Both girls are at Wellness Canyon for the summer. Wil against her will; April because she has worked and worked and saved and saved. The two, of course, are roommates. Their "success" at the camp depends on their ability to work together as a team, to work through any issues, to learn to trust one another, etc. But how do you do that when you can't stand the other person?!

The cover reads, "at fat camp even the drama is huge," and that gives you a fair description of what to expect. Two teen girls who are first brought together when they compete for the attention of a guy, Colin, and then brought together by the need for revenge when that guy turns out to be a big jerk. Perhaps because of the "boy drama" going on, Wil forgets temporarily that she desperately wants to gain weight at fat camp so her parents can't have the satisfaction of her success. So by the end of camp, Wil has lost weight too. 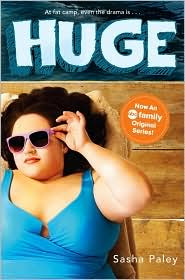 Huge has two narrators. And to be completely honest I had a hard time liking either of them. Wil, the richer of the two, seems to be the biggest pain. She's angry, bitter, rebellious. She acts out--speaks out--in anger a good deal of the time. And she seems to like being rude and hurting people. But her pain is obvious to anyone who's ever been there. Her parents have hurt her repeatedly--hurt her with their words, their actions, etc. What she's hearing is that she's not good enough as she is, that they are ashamed of her, embarrassed of her, etc. She feels that her parents just don't love her, accept her, understand her. I think the more her parents force the issue, force her to try to feel ashamed about her body, the worse it will be for her. I think FORCING her to go to fat camp against her will, forcing her to deal with her weight when she's clearly not ready to deal with it,  may not be the best in the long term. Losing weight is a LOT more complicated than it might appear.

If you're expecting "Biggest Loser" insights--break down moments where they get it, they really get it...then you'll be disappointed.

As for April, I think she's lost in her own dream world. She's equated being skinny with being perfect, being popular, being happy. She doesn't really seem to realize that she'll still be herself when she's lost the weight. She can't escape her issues just by losing weight. I think she desperately wants to be someone else. I think her shallowness may be hidden by her cheerfulness. I think she's able to hide her issues easier than Wil. But April has her own troubles, and they are revealed to a certain extent by the end of the novel.

The drama didn't exactly wow me. It was light and fluffy, a bit silly. The "conflict" over the jerk--to see which girl he liked best. The answer--he loves ONLY himself, and any girl with a pulse is good for a few minutes of attention, but not much else. And while I'm glad the two girls were able to bond over their plans for revenge, I thought that was silly too.