Into the Parallel (YA) 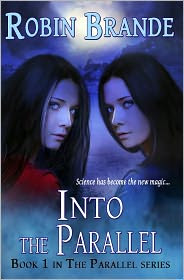 They said it couldn't be done.
Well, that's not exactly true.
They said it couldn't be done by a 17-year-old girl sitting alone in her bedroom on a Saturday morning.
Well, that's not exactly true, either, since it's not like there's some physicist out there who specifically made that prediction--"A seventeen-year-old girl in her pajamas? Never!"--but the point is, no one is going to believe me even if I can prove what happened, which I'm not really sure I can.
But I know I did it. I was there. I didn't imagine it or dream it or go into some sort of altered state that confused me. I felt the wind. I smelled the dog's breath. I saw our mother. I drank some tea. It all happened.
So if she's real--and I know she is--I just have to prove it. Go there again and this time bring something back. Like a strand of her hair or a piece of her fingernail.
Something with her DNA on it. To prove that she is me.

Audie Masters, our heroine, dreams big. She wants to prove that parallel universes exist. She wants to be accepted into Columbia. She wants her best friend's brother, Will. Of course, all three have seemed impossible--at one point or another. But one day one of her dreams does come true.

She travels to a parallel universe. She meets her alternate-self, Halli. And the two become friends--good friends. They like meeting one another. They like comparing and contrasting their realities. It seems that while some things remain the same, there are many, many differences. There are some things about Halli's world that sound really appealing. Then again, there are a few things that seem a little off.

Audie can't help becoming a little obsessed with her discovery, can't help wanting to spend all her free time in this parallel universe, sacrificing sleep and homework. (Not that it is really a sacrifice to her to sacrifice homework!)

But some secrets are too good to keep to yourself, and she contacts a physicist, Professor Whitfield, and she shares her discovery with him, her excitement with him. He is just as thrilled as she is. Especially when he sees her video. But he has some reservations about experimenting too much with travel between worlds (or universes or realities or whatever you want to call it). But isn't that a little too much to expect?

So the novel is about Audie's adventures in both universes, how she balances her two lives. This is the first in the series.

I'm not so sure my review is doing this one justice. I can only say that the characters were well-developed, and the premise was fascinating. This book is easy to spend an afternoon with! Robin Brande is a talented writer. She creates characters that you care about, characters that you feel like you know. It never takes me long to get hooked on one of her books, and Into the Parallel was no exception.

Labels: 2011, review copy, YA Fantasy, YA Fiction, YA Romance, YA Science Fiction