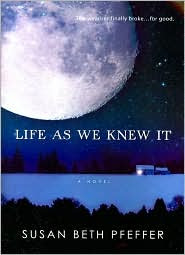 Life As We Knew It by Susan Beth Pfeffer. November 2006. I've reviewed this one SO many times since the initial review because this book has become one of my favorite-and-best books of all time.

A Crooked Kind of Perfect by Linda Urban. October 2007. I think my reading experience of this one is almost as good as the book itself. This is one that I read for Dewey's read-a-thon. I remember starting it in the wee hours of the morning--definitely past 1AM--and I just fell completely in love with it. I mean this book was my new best friend. I was so in love with it that I reread it within a few days. It's just one of those practically perfect middle grade novels!!! 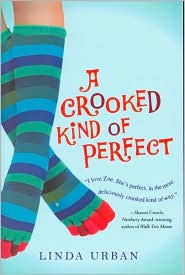 Billie Standish Was Here by Nancy Crocker. December 2007. If A Crooked Kind of Perfect reminds me of Dewey and read-a-thons, Billie Standish Was Here reminds me of Cybils! My very first year of working on a Cybils panel actually. This book truly was one of the best books I read that year, and it was all thanks to the Cybils that I discovered it!!!

The Underneath by Kathi Appelt. June 2008. I'll be honest with you. For some reason 2008 was the best, best, best reading year for me. Just looking at the end of the year best-of lists, I could have picked at least ten or twelve books that were worthy of attention here. Books that I just love and adore even after three years. Books that I feel more of a connection to than any I've read this year. It was the year I read Jane Eyre. It was the year I discovered Georgette Heyer. It was the year I read Hunger Games. And that's just getting started. So why did I choose The Underneath? Well, this one wowed me. And it wowed me upon rereading just as much. It's a beautiful, beautiful novel. And if nothing else, it proved to me that a dog can be on the cover of a book without me hating it.

Jellicoe Road by Melina Marchetta. November 2008. I know not everyone loves this one. Or loves, loves, loves this one as much as I do. It's a book that if you love, you love with all your heart. It's also a difficult read. I won't lie. 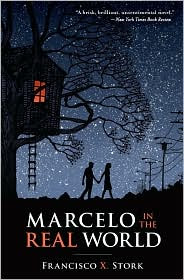 Marcelo in the Real World by Francisco X. Stork. March 2009. While it was slightly easier to choose from 2009, there were still easily six or seven that came to mind as being the best of the best of the best. I chose this book because I loved it. True, there were other books that I loved--that I still love. But this one deserves all the attention it can get.

The Ask and the Answer by Patrick Ness. September 2009. With as much passion as I loved this one, a second in the series, I hated the first book The Knife of Never Letting Go. You might think that it would just be weird--crazy--for me to pick up the sequel to a book I hated. So it's a good thing I have my own sense of logic, because I just LOVED, LOVED, LOVED this one. As in it restored my faith in reading. So, of course, it has to be on this list!

Our Mutual Friend by Charles Dickens. February 2011. Surprised to see Charles Dickens on the list? He's certainly not anyone I would have dreamed of reading back when I started in 2006. In fact, I thought I would NEVER willingly pick up any of his novels. But. I've changed SO MUCH as a reader through the five years I've been blogging. I just loved this one. It was just a perfect, perfect read for me.

What a great list, Becky! You might have just convinced me to read The Ask and the Answer, because I, too, hated the first book. I mean, I thought it was brilliant, but it was just too dark for me. Anyway, happy 5 years! The Kidlitosphere would not be the same without you, that's for sure!

Ah, a great list. The one I've heard the most about but still haven't read is Marcelo in the Real World. I've heard SUCH good things I'm almost afraid to read it for fear of being disappointed...

Great list! I am glad to see you warmed up to Dickens--maybe there is still hope for me yet!

Congrats on your five-year blogiversary, Becky!

Wow! Five years? It seems like you've been going forever, faithfully reviewing books day in and day out. You have such an extensive collection of reviews. Really fine, fine, work, Becky. What a wonderful service you're giving us. Thanks!

Fantastic list! And congratulations on such a huge achievement! Five years is such a commitment and one that not many other bloggers have been able to accomplish. Congratulations!

Congrats!! Five years is AWESOME!! I've changed so much too, since I started book blogging. And it's only been since 2010 for me. :P

Your list was so great I just had to bookmark it! And I had no clue Richard Armitage narrated audio books!!! I've loved him since watching him in North and South on Netflix (my friend Ame was kind enough to share her Armitage obsession) and I can't wait to read the book.

Congrats and Happy Blogoversary!! That's an awesome top 10 list; many many of my favorites on there. Here's to many, many more years.

Congratulations on your 5 Year Blog Anniversary!
Thank you for putting together this list.

I haven't read any on your list but I wrote them down :)

Five years! Thats amazing. Thank you for all the reviews

Wow! Five years...congrats! Great list. I have a few of them on my TBR pile.

I love this post SO SO much!!! I absolutely adored Marcello in the real world too :) Thanks to you. And of course I have to agree with you on Ask and the Answer and Life as we knew it. And I just ordered a copy of a different kind of perfect :)_