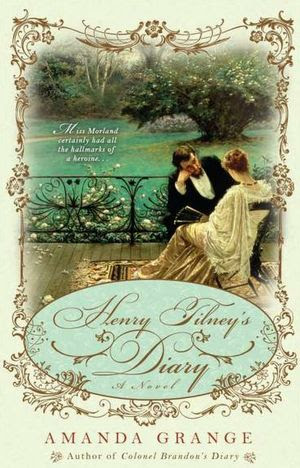 Wednesday 14 April 1790
No lessons, no tutors, no Latin, no Greek! How glad I am to be home again, with time to spend with my horses and dogs, my brother and sister, my mother and father. No more school for a month! Instead time to wander the abbey and roam the grounds.

Out of all the Austen heroes, Henry Tilney is probably my favorite and best. "Even more than Captain Wentworth?!" you might ask...
Well, that's like deciding between chocolate cake and chocolate cheesecake. Both are too good, too satisfying, too giddy-making to resist. Why would anyone ever even try...

So. Henry Tilney is a swoon-worthy Austen hero, in my opinion. His strength is his charm, his wit, his friendliness, his teasing-manner. He has a way of making people feel at ease, of making people feel good about themselves. I'm not even sure he has a weakness. He's not proud or anti-social. He's not insincere or deceitful or manipulative. He doesn't flirt with (other) women for fun or sport, or to make anyone jealous. He's not a bore. He's just a fun-loving, novel-loving, light-hearted guy. Who wouldn't want to spend time with him?!

So Henry Tilney's Diary presents his side--and to some extent his sister's side--of the story found in Jane Austen's Northanger Abbey. Half of the novel takes place before he travels to Bath and meets Catherine Morland. Readers learn about his relationship with his sister, Eleanor, his father and mother, and his older brother. (Does Amanda Grange try to redeem this bad-boy brother? Well, she gives just enough background that empathetic readers can put together an argument of sorts. But is it enough for your average reader? Well, I'm not sure that it is. Not that that matters horribly to the enjoyment of the novel.)

Henry Tilney spends MUCH of his time reading aloud to his sister, Eleanor. Both just LOVE Ann Radcliffe. Both just LOVE novels--gothic novels, in particular. Amanda Grange gives us multiple reading scenes. In fact, some might say too many reading-together scenes. On the one hand, she's definitely showing instead of telling. These two love to read. And since these two will in a period of time be meeting Catherine Morland, a heroine who LOVES, LOVES, LOVES to read, it makes a certain amount of sense to show that Henry Tilney is the oh-so-perfect match for her.  On the other hand, by quoting so much from a gothic novel--it appears to be the actual text of A Sicilian Romance--it just made this reader want to pick up the original.

The strength of this one is the background it provides readers. It doesn't add to Austen's Northanger Abbey, that is it doesn't improve it. As far as building his relationship with Catherine Morland. It doesn't make the story, the romance, 'better.' Tilney isn't more swoon-worthy or giddy-making in Grange's retelling. Neither is he less swoon-worthy. Where it adds to the enjoyment of Northanger Abbey is in its imagining of the close, caring relationship between brother and sister.

Mr. Tilney is one of my favorite Austen heroes, too. This book sounds like fun!

Jane Austen is one of my classic fave. Will going to check this one out! thanks for recommending!