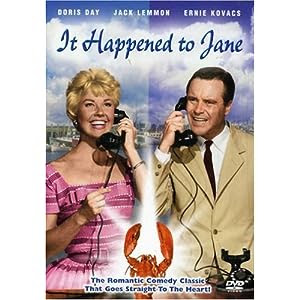 A few weeks ago I watched It Happened to Jane starring Jack Lemmon and Doris Day. What did I think? Well, I enjoyed it for the most part! Not that you should have high expectations that this is the BEST MOVIE EVER or anything. Because if you approach almost any movie like that, you'll be disappointed. But if you're looking for a movie to watch and enjoy once....then I think It Happened to Jane is worth your time. Just don't judge a whole movie based on the credits because the opening song is horrible...in my opinion.

Doris Day is Jane Osgood a single mom just getting started with her small business--selling live lobsters to restaurants, etc. The movie begins with a tragedy. The train company did NOT unload the live lobsters when they arrived, when they were supposed to. No, a few days went by before the train station discovered their mistake. The lobsters--the dead lobsters--were then returned to Jane. The extremely angry Jane turned to her childhood friend, George Denham, who is also a lawyer. (An untried lawyer perhaps because their small town doesn't see many cases, but still a lawyer.) They decide to sue the train company because it is the right thing to do, it is only right that the train company pay Jane for her lobsters since they were at fault. The train company agrees, at first, they agree to pay her the exact price she'd have gotten if her lobsters had been delivered live to the club. But by this point Jane has learned that her reputation is damaged and that she's lost some of her business permanently. So she wants more than just the cost of one shipment of lobsters. She wants something more.

She wins and loses all at the same time. For the train company has plenty of lawyers who will appeal this case and stretch it out as long as it takes. George urges her to let it go, but then Jane gets sneaky...very, very, very sneaky. And it becomes much too complicated to try to explain here.

In short, Jane takes on the meanest man in the world, the director of the train company. And since Harry Foster Malone plays mean, she plays mean too. And this battle gets a LOT of publicity. Soon everyone starts cheering Jane on....but that isn't exactly to the town's benefit. What these two need is resolution....

Of course, this movie isn't only concerned about business. There is the matter of who will win Jane's heart...George Denham who has not proposed to her since they were children or Larry Hall, a big city reporter who comes to town to interview Jane.

Watch It Happened to Jane

But I haven't finished George Washington Slept Here yet! This looks amazing. Have you ever seen Under the Yum Yum Tree? That's my favorite Jack Lemmon movie, and I love anything with Day. Sigh. Maybe after school is out, I will have a minitreat movie marathon!

Thanks for the recommendation! I've put Under the Yum Yum Tree on hold now!

This is one of my favorite, no thinking required, fun movies. I used to have it on a VCR tape that I recorded off of TNT or something. Need to buy a DVD now :)