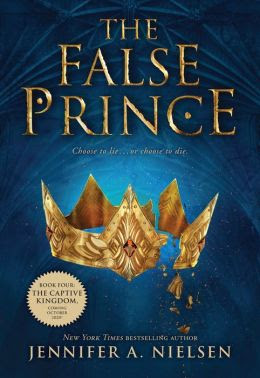 I thought this one would be good, but even I didn't expect it to be THAT GOOD. This book is WONDERFUL. Everything I wanted it to be! Readers first meet an orphan named Sage. When we meet him, he's on the run having just stolen meat from the butcher. He is "rescued" from the butcher by someone in the crowd, Connor. But is the rescue genuine?

Connor goes with Sage to the orphanage and explains that he's just bought Sage. Sage soon meets other orphan boys his own age that Connor has bought from various orphanages in the land. He's taking them to his castle...

Sage is suspicious fearing that Connor and the men working for him are DANGEROUS. Yes, he could be beaten, he could be imprisoned, but he knows that he could also be KILLED if he displeases Connor. Does knowing this make Sage less defiant or outspoken? Not really.

Connor has a plan--an ambitious plan. The royal family has been killed, murdered, and no one knows the truth, yet. The second son was presumed dead at sea, but, what if one of the orphan boys could assume this second son's identity and become king? Connor wants the boys in competition with one another and in training to become the future king. In a few weeks time, he'll pick the "lucky" boy.

Sage wants to be the boy, for better or worse, perhaps knowing that to fail in this means certain death. But that doesn't mean he likes Connor or trusts him. He doesn't trust Connor...at all.

I loved spending time with Sage! I loved being introduced to this fantasy world!!! I loved the setting, the characterization, the writing!!! This is a magical, oh-so-satisfying read!


“The saddest thing is there won’t be anyone to miss us when we’re gone. No family, no friends, no one waiting at home.”
“It’s better that way,” I said. “It’ll be easier for me, knowing my death doesn’t add to anyone’s pain.”
“If you can’t give anyone pain, then you can’t give them joy either.”

How can you not have read this one yet? I really enjoyed it too, though not as much as you did. Great review, and I loved the quote you picked out! :)

I loved the book as well and called it a fantasy when I began to write my review. What makes you call it a fantasy? Curious.

Did you know that Dark Triumph (Grave Mercy Book 2) is coming out soon? I'm reading it now, and it's amazing...

Also, (as I'm sure you know) The Runaway King (The False Prince Book 2) is out. I just got a review copy, and I can't wait!!