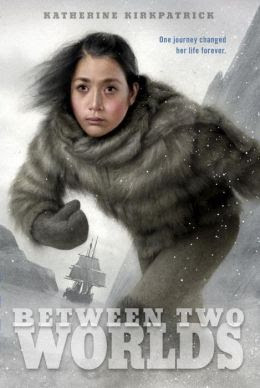 Between Two Worlds was an interesting and thoughtful novel. The novel is set in Greenland at the turn of the twentieth century. It is told from the native perspective, a young woman named Eqariusaq, nicknamed Billy Bah by Robert E. Peary's wife and daughter. The novel explores the tension between the heroine's "two worlds." On the one hand, as a child, she went with Peary and lived with his family for about a year in the United States. Several years later, her parents also traveled with Peary. But they never returned, along with the other natives Peary had selected. Those natives did not have the personal connection, the friendship. These men and women were to be studied by a museum. Between Two Worlds tells young readers of their fate and treatment--or mistreatment as the case may be. Readers learn alongside the main character. On the other hand, her home is her HOME. Spending time with white people (qallunaat) did not change who she was, did not change her way of life, her culture, her beliefs. She did not trade in her spirituality, for example, for that of the white men. Since her time with Peary's family, she has grown up and gotten married. She's still super young for marriage by today's standards, but today's standards just don't apply to ANY part of this novel.

One of the novel's greatest strengths, perhaps, is that it presents the facts with little or no judgment at all. How husbands and wives treated one another, how women fit into the community and village life, it's something that modern readers will question perhaps. Especially in terms of how husbands traded their wives amongst themselves in addition to trading them to the white men. Part of a woman's value was the value she could bring her husband. A wife's body could be sold or traded. Eqariusaq's husband, Angulluk, loved to trade his wife alot, especially to the white men. He loved how he could use his wife to obtain guns and bullets and planks of wood. I should also point out that men and women could decide to separate or "divorce." Marriage did not mean forever. Women could decide to discard one man in favor of another, in favor of a better. Billy Bah takes comfort in that fact as she seriously considers leaving her husband; she has little respect for him since he's lazy and greedy.

Between Two Worlds is a contemplative novel. Our heroine is very much torn in what she wants and what she needs. She is questioning her past, her present, and her future. Her memories of the past are bitter and sweet. There are memories she cherishes, for better or worse, but she's more analytical than she was as a child. There were things that happened to her in America that through her innocence she did not see as damaging or painful, but, upon growing up and growing wise, she realizes things aren't that simple. For example, she has happy memories of Peary's wife and daughter. Seriously happy memories. Yet, as an adult, as she meets them again after years apart, she realizes the complexity of the situation. Mrs. Peary is willing to risk the lives of the natives without a thought, without a thank you. She commands and expects obedience. She simply does not see the natives as being equally human, equally of worth.

I thought it was a compelling read. It presents a whole other world to readers.
© 2014 Becky Laney of Becky's Book Reviews
Posted by Becky at 7:30 AM