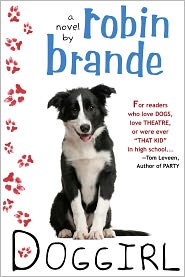 I've been wanting to reread Robin Brande's Doggirl for years now. I first read it in June 2011 and it was LOVE.

Riley Case is the heroine of this coming-of-age middle grade novel. Riley and her parents have recently moved to the area. The "official" reason for the move is for her mom to take a teaching job at a college. The unofficial reason for the move, well, Riley was being bullied by some of her classmates, and her life had become misery.

Riley knows exactly what she wants out of life. She wants to be an animal trainer; her dream job would have her training animals for movies and/or television. She loves, loves, loves her three dogs. And she loves working with them daily and training them. And she has got incredible talent training them! Talent which doesn't really go unnoticed.

Riley decides to go outside her comfort zone and collaborate with the drama department for a play, for a competitive project. Riley and her three dogs are an almost instant hit with all involved on stage and behind the scenes.

In some ways, Riley is ecstatic with the changes in her life. The people she's met, the students, well, the way they all work together and fit together, there is something so delightful and inviting about being a part of something, of BELONGING. But. Riley has never really had the "belonging" experience before. She's thought she's had it, she has felt liked and accepted before ONLY to have the worst happen: pure humiliation, repeated humiliation. Of course, she WANTS friends, she wants to have found a group of friends to belong with, to be with. But she's hesitant to commit as well, to show that she wants it, if that makes sense. What if it is all too good to be true? What if they don't really like her? What if they're just using her for the competition?

There is something sweet and honest about the whole book, something that you don't find in every book.