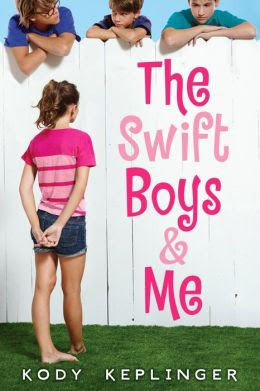 Having read The Swift Boys & Me, I'm not sure the book matches the cover. I think the cover is cute enough, mind you, but The Swift Boys & Me is not exactly a "cute" kind of book. For one thing, this coming-of-age novel is much more serious than you might suppose. I also don't like the fence, though I suppose it might work symbolically to show the new and uncomfortable distance between the heroine, Nola Sutton, and the three Swift brothers (Brian, Canaan, and Kevin). Still. In Nola's subdivision, there is only ONE house with a fenced in yard. All the other houses are fence-free. The children run and play WHEREVER they want, WHENEVER they want throughout the neighborhood. Teddy Ryan is the boy who lives in the fenced-in house. He is the boy in isolation, the boy with no friends.

So. The Swift Boys & Me is a coming-of-age novel. It opens with Nola witnessing something big, though she was clueless at the time. She sees Mr. Swift drive away late one night. She doesn't learn until later that his driving away meant he was LEAVING the family for good. Brian, Canaan, and Kevin react to their dad leaving in different ways. Though none of the ways really includes staying friends with Nola. Kevin, the youngest, stops talking. He blames himself for the last argument. Canaan, after the first forty-eight hours or so, decides that Nola is nothing to him. That he should start hanging out with other boys his age instead. He ends up getting in with a group of boys who thinks it's fun to step on dog's tails and spray paint mailboxes with bad words. And Brian, well, he essentially runs away from home skipping around from friend-to-friend-to-friend. This will be the very first summer that Nola remembers where she is NOT friends with the Swift brothers at all. Do you see why the description "Four friends. One summer." is a bit off?!

So since Nola is NOT friends with Canaan and Kevin and Brian, how does she spend her days?! She spends them working small jobs and hanging out with other neighborhood kids. She discovers that she LIKES spending time with other kids. Even Teddy Ryan. In fact, she might like like him. She also spends her time getting ready for her mom's wedding. She also is preparing to pack up and MOVE neighborhoods.

The Swift Boys & Me is definitely a book about changing and growing up. Nola is essentially preparing to say goodbye to what was. Changing neighborhoods isn't the only change in her future. She'll be starting middle school in the fall. The fact that she is no longer speaking to the Swift brothers (with the slight exception of Kevin who sometimes still comes around though he doesn't really speak) makes the change easier to accept.