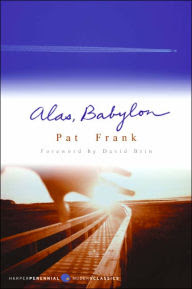 I spent the whole year of 2015 meaning to read Pat Frank's Alas, Babylon. So I decided that this year, it would be one of the very first books I read. I wasn't going to let another year pass before I sat down to reread this sci-fi classic.

Alas, Babylon was originally published in 1959. I think it is crucial to remember that fact as you're reading. The book is set during the Cold War, published during the Cold War, and asks the question: WHAT IF the Soviet Union uses nuclear warfare and attacks various cities and bases across the whole United States. Would there be survivors? How would people survive? What would they eat and drink? Not just in the initial weeks following the nuclear war, but, more long-term than that. How would they cope--how would they manage--without electricity, without batteries (once they ran out), without cars (once all the gas was gone), without new supplies arriving by truck or plane, etc. Would communities come together or be torn apart? How would people deal with one another, treat one another? Would lawlessness prevail? Would fear and anger and greed win the day? Or would people still look out for one another?

Alas, Babylon is not just a what-if story, however. It is a personal story, that I felt remained character-driven. It stars Randy Bragg and his family. His brother, Mark, sends Randy a warning in a telegram, "Alas, Babylon" their code for the end is coming, war is inevitable, be prepared. Randy prepares to receive his sister-in-law, niece, and nephew into his Florida home. The book is set in a small community in Florida, a community that is fortunate in some ways--many ways. Readers get a chance to know quite a few of the locals in addition to this one family. For example, the local librarian who finds herself most necessary to the community. The library COMES ALIVE after the attack, as people become desperate for information and news, for entertainment, etc.

I liked the practical aspects of Alas, Babylon. Unlike Life As We Knew It, I felt it handled the situation practically, logically. One of the big issues I had with Life As We Knew It, a book I love despite its flaws, was the fact that it got a few practical things wrong: for one, how people get water. It has the heroine's family getting well water through their pipes without an (electric) pump! Not the case with Alas, Babylon. If it has flaws, they didn't leap out at me.

Alas, Babylon is a thought-provoking novel. One I'd definitely recommend.

Nice review. I read Alas, Babylon when I was about 12 and thought myself so smart cause I knew the title was from Revelations. But I have to admit, it was a scary story on so many levels. I may have to reread this one of these days.

This has been on my TRB list for ages. Thanks for the great review.

This is one my wife read in high school and recommended to me. Love it!

I enjoyed this book but it made me realise how totally unprepared and useless I'd be if something like this happened. Just having your water cut off for a couple of days would be bad enough.