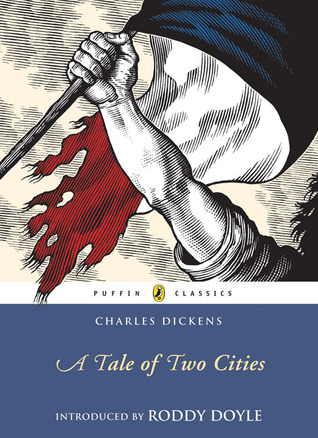 Premise/plot: A Tale of Two Cities is very much a novel of love and sacrifice. But would the sacrifice be necessary if bitterness, rage, anger, hatred, despair, and a thirst for vengeance didn't abound? A Tale of Two Cities begins and ends in France. And not a happy period in French history, one of the darkest perhaps. Charles Darnay, our hero, escapes France once, but, he may not escape it a second time. Same can be said of our heroine, Lucie Manette, and her father, Dr. Alexandre Manette. So why do they return to France and risk it all--knowing the country is uneasy, unsafe, topsy-turvy? Well, duty, honor, and nobleness? Of course it is their very nobleness--one understanding of the word--that leads to everyone wanting them to die.

So the very basics for those not in the know: Lucie Manette loves Charles Darnay; the two are married and have a daughter. They both adore her father who has had a very rough time of it--physically, mentally, emotionally. Lucie Manette is beautiful (of course) and practically perfect in every way (of course). So Charles Darnay is not the only one who is head over heels in love with her. He is the one who has her heart, body, soul. Mr. Sydney Carton was also head over heels in love with her; he loves her still.

The trouble begins when Charles Darnay receives a letter from France and decides to return there to see if he can help. His family follows after him risking all.

My thoughts: I found A Tale of Two Cities to make little sense. Hold on before you start hating on me, perhaps this is intentional. France is a chaotic mess; an upheaval in progress; everything right is now wrong and everything wrong is now right. It is almost as if logic and common sense and decency has been thrown out altogether. The characters--particularly the French ones--seem to be corrupted thoroughly. There is little room for kindness, compassion, the benefit of the doubt. It is like the masses have been given permission to run wild: to be violent, to seek vengeance, to let all the rage out; punishments don't fit the crime--not here, now now. A Tale of Two Cities reflects how HORRIBLE mob mentality is. Violence and mob-rule never lead to lasting peace and justice. In their quest for "justice" all the mob could do was injustice. There is nothing just about any of the mob's actions.

Perhaps fear of sympathizing with those on the wrong side of the mob led to little kindness, sympathy, empathy, compassion, or speaking out for truth and justice. The mob could turn on you; you could be next if you spoke out in defense of the "guilty."

Regardless, I found A Tale of Two Cities to be senseless. But I think it's an intentional senseless that reflects the time. There are no good answers for WHY.

It is in contrast to all this CHAOTIC evil that Sydney Carton enters the picture.

I do appreciate this one more the second time. I found it a brutal read the first time.

A wonderful fact to reflect upon, that every human creature is constituted to be that profound secret and mystery to every other. (11)

I've always wanted to read this one.

It was a senseless and wild time period for sure, and the herd mentality was terrifying. In a way it had a bloodthirstiness Dickens didn't include often. But I loved it for the two look-alikes and Carton's amazing sacrifice.