Waiting for A Memory 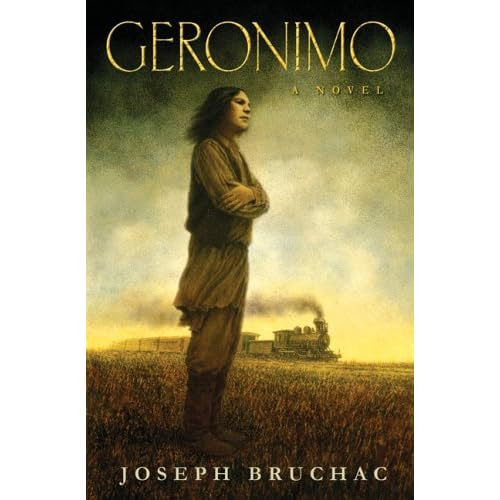 Geronimo was a legendary figure in American culture, and during the last half of his lifetime, a tourist attraction wherever he went. And while Joseph Bruchac's novel GERONIMO describes this vividly, he also paints a portrait of a real man. Told through the eyes of "Little Foot" or "Willie" this fictional grandchild of Geronimo is responsible for passing on his legacy through the stories he shares.

"Remember That is what I now do. I tell the story as best I can. With each line of my tale I will place a kernel of corn on the ground. Then, when I am done, that corn will be there for you to pick up. Eat it and this story may stay with you as it has stayed with me. Do not fall asleep, or the story may be broken, as were our lives. Listen" (5).

While it doesn't follow strictly chronological guidelines, the main story takes place between 1883 and 1908. The heart of the story is the imprisonment of the Apache Indians--yes, I know there is a more descriptive, more accurate name, and their exile from their land in Arizona. They were deported by train, under guard, to camps and forts in Alabamba and Florida. The train carrying Geronimo became a tourist attraction at every stop along the way, and a money-making venture.

"'They are waiting for a memory,' Wratten said to me as we passed slowly by yet another great crowd of waving, shouting people. 'They want to be able to tell their children they saw Geronimo.'" (78)

The memories they make for themselves in their new homes were anything but pleasant. Full of hard work, sadness, depression, and disease--their camps were prone to malaria--they were often separated from their families...wives from husbands, and children from parents. Many children were sent to a school in Pennsylvania where many became sick with tuberculosis and died.

Woven into the stories of hardships and broken promises, are stories of the past both pleasant and bittersweet. Their days of peace and contentment, and their days of battle fighting the Mexicans and Americans.

Beautifully written, I hope this book finds its audience because it is a truly memorable book.