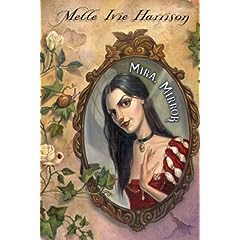 Mira and Amanda are two sisters with two different destinies who share a common bond: magic. Amanda has one desire: to become a powerful queen. Amanda will do anything to anybody to make sure that dream becomes reality--even if it means trapping her sister, Mira, in a "magic" mirror. Using the magic mirror, Amanda becomes the fairest in the land. Sound familiar? That's because Harrison's novel MIRA, MIRROR is a new twist on an old tale: Snow White and the Seven Dwarfs.

But MIRA, MIRROR is not the traditional telling. In fact, there is hardly any mention of Snow White or any of her seven dwarfs. Instead, MIRA, MIRROR is the story of what happened a hundred years after the "happily ever after" ending of Snow White. It tells what became of the magic mirror. Alone and abandoned, Mira has almost forgotten what it means to be human. She spends her day hanging on an ivy-covered wall hoping that some day she'll be human again. But in her quest, she realizes that she is just as selfish and manipulative as her sister was.

Mira is found by a young girl, Ivana, who is escaping an abusive father and an arranged marriage. Together the two find themselves far away from their painful pasts and desperate to find new beginnings. Ivana wants the magic mirror to change her face so she'll be safe from the men in her past who want only to use her. Mira, of course, is using Ivana to get her across the country--and hopefully in contact with some magic she can use to transform herself back into a human. Both are in luck when they meet Talia and her father, a merchant, traveling along the road. Encouraged by Mira, Ivana tells a series of lies to convince the traveling pair that she is a merchant's daughter whose father was just killed by bandits when robbing their carriage. Talia's sweet and trusting nature convinces her father, despite his doubts, to take the girl along with them.

That night, the mirror does its work: it changes Talia's face into Ivana's and vice versa. Both Ivana and Mira are surprised when Talia does not protest the change. In fact, she is relieved to trade her plain face for Ivana's beautiful one. She's also relieved to be escaping from the marriage that her father had arranged for her! The father, Merchant Minitz, takes both girls home and soon they are one big happy family.

Mira learns--after time--that being human is more than having power over other people. While her previous experiences with humanity were full of bitterness, cruelty, and hate, she sees for the first time how two sisters should treat each other. She sees two sisters who love and trust one another. Something that her experiences with her sister Amanda had never allowed. Through her experiences as a magic mirror, especially in watching these two young girls, Mira learns what it means to be human.

MIRA, MIRROR is a clever and well-written novel. The characters are well-developed. Mira--both as a human and a mirror--possesses both good and bad character traits. While she is manipulative, selfish, and power-hungry, Mira at the same time questions her own motives and those of the people around her. Surrounded by the love and generosity of Talia and Ivana, Mira for the first time feels compassion, love, and a concern for others above herself. At one point, Mira would have sacrificed anybody or anything for the chance to be human again, but things change. By the end of the novel, Mira would do anything--even sacrificing her existence as a mirror--to protect the two girls.

MIRA, MIRROR is also an examination of how girls (young women) were treated in folk tales or fairy tales. Girls (and/or women) were generally either subject to their father, subject to a husband, or were witches--seen as evil, ugly, and animal-like. They did not have the option to be independent. By the end of most folk tales or fairy tales, the young girl gets married and supposedly lives happily ever after. Talia is a young woman who does not want to get married; she wants to be independent--she wants to become a merchant. Talia is a woman who is strong, confident, full of opinions, and wants to live her life her way.

MIRA, MIRROR is an enjoyable and satisfying read. I wholeheartedly recommend it to readers of all ages. There are many modern books--some YA and some adult--that are new twists on old tales. One of my favorites is a twist on Sleeping Beauty by Orson Scott Card called ENCHANTMENT. (ENCHANTMENT is an adult novel which can easily be read (and enjoyed) by young adults.) Fans of this book should definitely seek it out. For the young adult audience, Robin McKinley has written some great books including Spindle's End, Beauty, and Rose Daughter. For younger readers, Donna Jo Napoli has written many novels which are based on traditional tales (ZEL, BEAST, CRAZY JACK, THE MAGIC CIRCLE, SPINNERS). Jane Yolen has written some as well (for example, BRIAR ROSE).