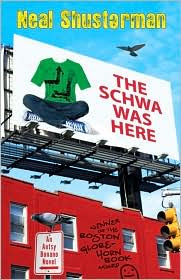 Set in Brooklyn, THE SCHWA WAS HERE tells the story of an unusual friendship that develops between two eighth grade boys: Antsy and the Schwa. Anthony "Antsy" is the middle child of his Italian Catholic family. Calvin Schwa "Schwa" is the only child of his absent-minded father. The "Schwa" is known for being invisible-ish; he goes unnoticed not only by his peers but by most adults as well. Antsy inspired by the scientific method just discussed in class decides to conduct a series of experiments to see if the Schwa truly is functionally invisible. The second experiment is the best. The hypothesis:

"The Schwa will not be noticed even when dressed weird and acting freakishly" (26).

The Schwa is dressed in a cat costume and a orange fluorescent sombrero and is sent into the boys bathroom and told to sing "God Bless America" loudly. Antsy and friends then interview boys coming out of the bathroom to ask if there was anything unusual going on. The resulting answers are comical and lead to the conclusion that "even when acting weird and dressed like a total freak, the Schwa is only barely noticed" (28).

Unfortunately, after three experiments, the science teacher gives Antsy an "F" thinking the whole project to be a scam. But the friendship--odd as it is continues to develop. Since experimentation to document the Schwa effect is off limits, Antsy decides to become the Schwa's agent. Students can hire the Schwa to be their eyes and ears. The Schwa moves about the school unnoticed going into the teacher's lounge, girls locker rooms, and even the principal's office. One student even dared the Schwa to wear nothing but a speedo to school to see if he'd be noticed; he was caught--but not until third period! Although some people seem to find his functional invisibility humorous, the Schwa is not happy. He wants to be noticed. In fact, he thinks that it was his freak "invisible-ish" that led his mother to disappear from a local supermarket. But with the help of his new friend, the Schwa solves an old mystery and gains a chance at happiness.

Narrated by Antsy, THE SCHWA WAS HERE is an often-humorous novel filled with truisms.

"Life is like a bad haircut. At first it looks awful, then you kind of get used to it, and before you know it, it grows out and you gotta get another haircut that maybe won't be so bad, unless of course you keep going to SuperClips, where the hairstylists are so terrible they oughta be using safety scissors, and when they're done you look like your head got caught in a ceiling fan. So life goes on, good haircut, bad haircut, until finally you go bald, and it don't matter no more" (70).

It is an enjoyable read that presents the social hierarchy of middle school in a refreshingly humorous--although not humiliating way. (I hate books or movies with characters who go through such embarrassing situations that you just want to cringe and in the case of movies cover your eyes.)

I absolutely loved the novel. The characterization was great. The writing was excellent. The novel was funny in many places, yet it addressed serious issues as well. I rank this as one of the best books of the year.

Some of the attention this book has received:

It won the 2005 Boston Globe-Horn Book Award for Excellence in Children's Literature in the category of fiction and poetry.

It was one of eighty-six titles on YALSA's Best Books for Young Adults 2005.

It was also one of ALA's Notable Children's Books for 2005 in the category of Books for Older Readers.

This seems really good! I might just have to read it. Love your reviews!