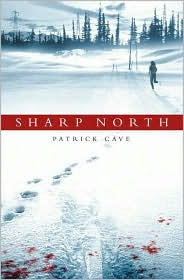 The girl nearly didn't find out who she was. What she was.

Sharp North is a perplexing YA novel. Part mystery. Part thriller. Part dystopian. It's set in a future world forever altered by global warming. A future world with a corrupt government. (How many fictional future worlds don't have a corrupt government?) A future world threatened by an underground movement, a revolution in the making. Our heroine, Mira, has a role to play in this world--for better or worse. And it's a role that mystifies Mira. For Mira's future is just as uncertain as her past.

Sharp North begins with a murder. Mira witnesses this murder, this hushed up murder, and it forever changes the way she sees the world, the way she sees her community. In part because she finds out that she is connected to the victim. She finds a piece of paper, a mere scrap, with a list of names. Her name is on the list. And so is the name of one of her friends, Gil Moore. He's listed as "her watcher." But why is he watching her? Is he her friend or her enemy? Is he out to see that she survives? Or is he in place to eliminate her? That's what Mira can't forget, can't erase. Are the people who murdered this mysterious woman, this mysterious stranger, out to get her? What led to this crime? For even if the whole world chooses to ignore it, Mira can't. Was it the woman's curiosity? Well, Mira can't help being curious now!

So Mira sets out on a journey to discover the truth, the truth about who she is, what she is. In a way she's running away from danger just as much as she's running straight into it. For Mira hasn't a real clue who her enemies are and who her friends may be. Is there a safe place for Mira? Or is she destined to upset the balance of those around her?

We meet a few interesting characters in Patrick Cave's Sharp North. Including several members of the Saint family, one of the "Great Families" that govern in this new world.

So did I like it? Yes and no. I liked the idea of it. But. It felt like two or three stories pieced together. And it didn't always work for me.

Labels: 2004, 2006, cloning, dystopia, library book, Simon and Schuster, Survival, YA Action, YA Fiction, YA Mystery, YA Science Fiction, YA Thriller