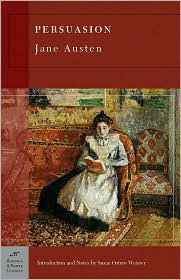 Sir Walter Elliot, of Kellynch-hall, in Sometsetshire, was a man who, for his own amusement, never took up any book but the Baronetage; there he found occupation for an idle hour, and consolation in a distressed one; there his faculties were roused into admiration and respect, by contemplating the limited remnant of the earliest patents; there any unwelcome sensations, arising from domestic affairs, changed naturally into pity and contempt, as he turned over the almost endless creations of the last century -- and there, if every other leaf were powerless, he could read his own history with an interest which never failed -- this was the page at which the favorite volume always opened: Elliot of Kellynch-Hall.

Oh how I love Persuasion. It's not every book I read that inspires this type of devotion, attention. A could-talk-for-hours-and-hours-and-never-tire-of-gushing love and devotion. In her younger days, Anne Elliot fell madly in love with (Captain) Frederick Wentworth. In chapter four, we read:


He was, at that time, a remarkably fine young man, with a great deal of intelligence, spirit and brilliancy; and Anne an extremely pretty girl, with gentleness, modesty, taste, and feeling. Half the sum of attraction, on either side, might have been enough, for he had nothing to do, and she had hardly any body to love; but the encounter of such lavish recommendations could not fail. They were gradually acquainted, and when acquainted, rapidly and deeply in love. It would be difficult to say which had seen highest perfection in the other, or which had been the happiest; she, in receiving his declarations and proposals, or he in having them accepted. (25) 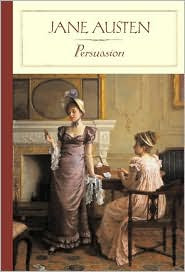 But this happiness does not last. For a "wise" friend standing in the place of a mother, the only kind and caring person in young Anne's life, counsels her against the match. For Wentworth is penniless, at the moment, he has no way to support her. And, Anne is young. Maybe Wentworth is the love of her life, but what if he isn't? Wouldn't it be wiser to wait, to not marry so young? Two hearts are then broken by her decision to part.

The novel opens eight years later. Fate will bring Anne Elliot and Captain Wentworth into each other's lives again. What will happen when these two meet again? She's never stopped loving him. But how does he feel now? Does he love her still? Or did he forget her? Has he forgiven her? Is he angry? bitter?

Anne is taken advantage of by her family. Her father and older sister pay her no mind. They talk at her, mind you. Try to direct her so they can tell her how not to embarrass them.  But they've never listened to anything she's ever said. We read in chapter one:


Anne, with an elegance of mind and sweetness of character, which must have placed her high with any people of real understanding, was nobody with either father or sister: her word had no weight, her convenience was always to give way; she was only Anne. (5)

She's too intelligent, too wise, too observant, too kind, has too much common sense to do them any good. What her father loves best is his own reflection. And her older sister isn't that much better. No, it is their pride, vanity, selfishness, shortsightedness that has endangered their estate. They are moving to Bath to maintain appearances, but their estate will be rented to a naval officer. (But some people can't be humbled.)

Anne does have a second sister, Mary, who's married to Charles, a man who would have much preferred marrying her. (Mary is his second choice, at best, and though he may not act like it in their encounters, there are those in his family who can't forget that Anne is the better woman.) So is Mary better than Elizabeth?  She does have use for Anne. She does enjoy Anne's company. She just loves confiding in Anne. Everyone loves confiding in Anne. (Or should I say complaining to Anne?) Still, her time with the Musgroves isn't horrid. And if she wasn't there, who would love those nephews? They certainly receive no love or care from their mother!


To be claimed as a good, though in an improper style, is at least better than being rejected as no good at all; and Anne, glad to be thought of some use, glad to have any thing marked out as a duty, and certainly not sorry to have the scene of it in the country, and her own dear country, readily agreed to stay. (32) 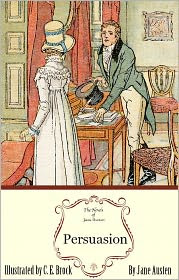 While her father and sister have gone ahead to Bath, she remains behind. And it is while she's visiting the Musgroves--her sister Mary--that she sees Captain Wentworth again. He appears to have gotten over her. He appears to be falling in love with one of the Musgrove sisters. But. appearances can be deceiving. Will Anne get a second chance?

I love this one. I do. I love Anne. I love Captain Wentworth. I love so many of the secondary characters--maybe love isn't quite the right word. Since most are very flawed, each with his or her own quirks. But still. I enjoy spending time with this novel. I like visiting these characters again and again and again. And that letter!!!! I just LOVE, LOVE, LOVE Captain Wentworth's letter to Anne in which he declares how much he still loves her, wants her, needs her!


I can listen no longer in silence. I must speak to you by such means as are within my reach. You pierce my soul. I am half agony, half hope. Tell me not that I am too late, that such precious feelings are gone forever. I offer myself to you again with a heart even more your own than when you almost broke it eight years and a half ago. Dare not say that a man forgets sooner than woman, that his love has an earlier death. I have loved none but you. Unjust I may have been, weak and resentful I have been, but never inconstant. You alone have brought me to Bath. For you alone I think and plan. (234)

This romance is so wonderful, so giddy-making. I can't recommend it enough!!!

This is one of my all time favorite books, such a beautiful story. The movie version of it with Amanda Root is one of my favorite movies, I have watched it so many times.

I'm with you 100%. Since my first reading of this book in 2005 it's been my fav Austen and one of my fav books of all-time. It's such a beautiful story and there's so much more powerful about a love that survives 8 years of separation. Great post!

I'm going through Jane Austen's books now. Persuasion will be up next :)

This is my all-time favorite book. I love Anne and Wentworth, and I love the flawed characters because they are so entertaining.

Yes! Yes, yes! I'm always happy to find another who adores this book. One of the best love stories ever.

This is truly a lovely book with a couple I adore, and a great cast of interesting people that I am glad I am not related to.

Persuasion is one of THE best books I've ever read and I feel it is severely under-rated. You cannot believe how absolutely happy I felt when I read this review-It just so echoes my own sentiments. Thank you!