The Voyage of the Dawn Treader 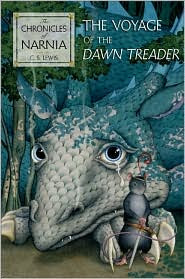 The Voyage of the Dawn Treader is one of my favorite, favorite books. There are seven books in the Chronicles of Narnia, this is the third. Yes, third. For there is NO other way to read the books then in their proper order: The Lion, The Witch, and the Wardrobe, Prince Caspian, The Voyage of the Dawn Treader, The Silver Chair,  The Horse and His Boy, The Magicians Nephew, and The Last Battle.

This third adventure stars Lucy and Edmund Pevensie and their cousin, Eustace Scrubb. These three are transported to Narnia--much to Lucy and Edmund's delight and Eustace's horror and disbelief--through a magical painting. Lucy remarking one day that the ship in the picture looks Narnian, that those waves look like they're moving. Once on board this ship, they meet King Caspian. They join him on his quest to find his father's missing friends, these "seven lost lords": Lord Bern, Lord Octesian, Lord Restimar, Lord Rhoop, Lord Mavramorn, Lord Revilian, and Lord Argoz.

The book is a series of adventures; these adventures being loosely tied together by their one mission, one quest, of discovering the fate of these seven lords. They are NOT out to save the world, NOT out to save Narnia from a dark and evil threat. They are adventuring for the sake of adventuring. They are facing risks, yes, because they are curious and brave and loyal. But they are not facing risks because there is evil lurking and threatening to destroy everything they know and love. Why mention this? Well, if you saw the movie, you might have gotten a different idea of their adventures.

What do I love about this one? The characters and the stories! I love to see how Eustace is turned into a dragon. I love, love, love how he's restored and healed by Aslan. That scene being oh-so-magical! (And the movie? Well? They don't quite capture it the way the book did. They changed things throughout.) There are so many elements that I just loved in this one! Lucy "helping" the invisible dufflepuds, Dark Island and the albatross, etc. And then, of course, there is Reepicheep!!!

So do I recommend this one?! Yes!!! How did I feel about the movie? Well, there were places I enjoyed it. But they rearranged things; they changed things; they added and subtracted. And there were a few scenes that just felt tedious. (The big scene that is supposed to be the climax; the big battle). But it was a beautiful movie. It was compelling even if it was different. Were the changes necessary? I'm not convinced they were. Especially how they felt the need to add conflict and tension between the characters--when there wasn't any in the book. But it wasn't a horrible adaptation.

I agree with you. Although I enjoyed the movie, it couldn't compare with the movie in my mind. And the reason I like this one is, as you said, they're looking for adventure because they can, not because "Narnia depends on it." I thought there were a couple of nice additions to the film, but there was a lot that was glaringly obvious that it had been tacked on by an inferior storyteller - it just wasn't the same.

I haven't seen the movie version yet, but I really want to. I haven't read the Narnia series in ages, not since I was a kid (Maybe 7 years old?), so my perception of the stories has been tainted by the Hollywoodized movie adaptations and my lack of memory of the books themselves I'm afraid.

I haven't seen the movie version yet, but I really want to. I haven't read the Narnia series in ages, not since I was a kid (Maybe 7 years old?), so my perception of the stories has been tainted by the Hollywoodized movie adaptations and my lack of memory of the books themselves I'm afraid.

I read the book as a young child but enjoyed it more when I read it recently. The movie was pretty enjoyable but, like you said, not a great translation of the book.

This cover is not one of my favorites. This series is still read by a few of my students.

for a change I have the narnia series in one big book already on my shelf! as always you do excellent reviews!

Nice blog.
I also have this one
http://bestseller-books-reviews.blogspot.com
What do you think about a LINK EXCHANGE?
Send me a mail rdon@yopmail.com
See for your reply.
Bye.
Richard

Milly said...
This comment has been removed by the author.
6:10 AM

cool review and i love the cover ( i mean who dosn't like Dragons). i hope you will enjoy my blog as much as i enjoyed yours. :)
Paper Dolls - Teen and Tween Book Reviews

Sorry, but I've always preferred to read the books in chronological narrative order.

But I do love them, been a while since I read them, but the movies did a wonderful job of reigniting my interest in them. Doing a good job of telling the story...eh. But I think that's how these things always go XD

The movie could have done much much better I feel..Just wasn't up to the mark..