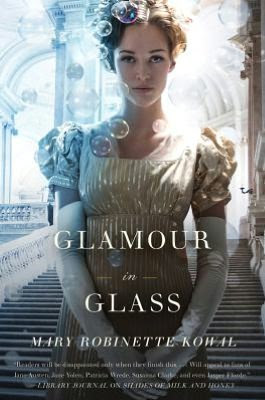 Finding oneself a guest of honor only increases the presentiment of anxiety, should one be disposed to such feelings. Jane Vincent could not help but feel some measure of alarm upon hearing her name called by the Prince Regent, for though she fully expected to be escorted into dinner by someone other than her husband, she had not expected to accompany His Royal Highness and to be seated at his right hand.

Sequel to Shades of Milk and Honey.

How much should you know going into a book? On the one hand, I had a difficult time getting into Glamour in Glass and just a hint of what it was REALLY about would have helped me so much. On the other hand, would knowing have taken out all the suspense and tension?

I enjoyed quite a few things about Glamour in Glass. I liked that it was a clean read, for the most part. It is so refreshing to read a honeymoon book that is not graphic in detail. I know that wouldn't be a plus for every reader, but, for me, it worked out well. And while this one is a 'honeymoon' book--meaning that everyone is waiting to see *when* the honeymoon would be over, when the couple would start fighting and getting annoyed with one another--it isn't just that though. If the real drama had not started, I might have given up on this one. If the book had just been about the tension between these two as business partners--as glamour partners--or if the book had just been about her getting annoyed with her husband for not sharing enough about his feelings, his memories, his doubts, his dreams, etc., then I would have probably given up on it.

But this book is set in Europe during a dangerous but exciting time (exciting to read about perhaps, not exactly exciting to live through). Napoleon's threatening return. And since this honeymoon just happens to be in his path--well, things get a bit exciting.

What I didn't exactly love in this one was all the talk about glamour, about *how* glamour worked, about the new experiments in glamour, about all the rules of glamour and what that meant for married women in particular. In some ways the talk was just too much, but in other ways even with all this talk, not enough was clearly said. For example, we're told that pregnant women could never, ever, ever, ever, ever, ever use glamour. Ever. But we're not told why really. We're not told how using glamour effects the unborn baby, and what risks would be involved if a woman dared to break the rules.