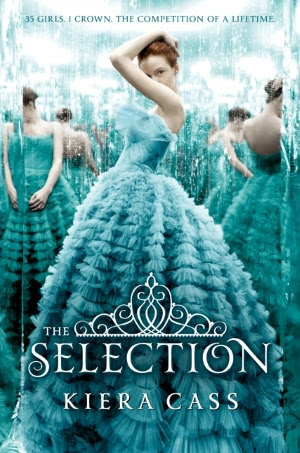 When we got the letter in the post, my mother was ecstatic. She had already decided that all our problems were solved, gone forever. The big hitch in her brilliant plan was me. I didn't think I was a particularly disobedient daughter, but this was where I drew the line.

The key to enjoying this one may be to approach it with no expectations at all. If you've been told--and I'm not sure who is doing the telling--that this one is in any way like The Hunger Games, then you'll be disappointed most likely. I admit that both books do have a love triangle. And I suppose that both books have a reality-TV aspect to them to a certain degree. But really these are two completely different books.

If The Selection reminded me of any book at all, it was the book of Esther from the Old Testament. Our heroine, America Singer, is one of thirty-five young women chosen to be a potential princess. The Prince, the heir to the throne, is about to begin courting these women--one woman from each district in the realm. They will live at the palace--along with the royal family, though on a different floor. The women will receive makeovers, beauty treatments, wardrobes, etc. The women will also undergo some training. Training that will only increase as the Prince narrows down the women from thirty-five to six. (Ultimately, of course, he'll be choosing one woman. But this book is the first book in a series, and the end of this book only gets us down to six.) America soon realizes that for some, it's a matter of seeing the crown and only the crown. In other words, they want to be princess--ultimately queen--and they don't care who they have to marry to get it. But other women do seem to care for the prince as a person--America is one of them.

The Love Triangle. My feelings weren't torn between the two men at all. I don't know how much I can say about the romance of this one without spoiling things. But. This one is mostly dialogue between America and Prince Maxon. And I liked that. When I'm reading romance, I want dialogue. I want to get to know both the heroine and the hero. I want to see the relationship develop.

What would have made this book more satisfying is if it had been resolved in one book...


Is The Selection the absolute best book I've ever read? Of course not. Was the characterization amazing? Not really. But did I really enjoy it? Did I read it in one day? Were there scenes that made me smile? Yes. Yes. Yes.

I guess I didn't realize that there was so much dialogue!

Yep, totally not for me. Thanks for the heads-up. I refuse to deal with love triangles any more.

This looks interesting! I might see if I can find it to read it.

Okay, I LOVE that I'm not the only one that saw the Esther parallel. I also love your bullet points. I wasn't too bowled over by The Selection (here's my review, if you're interested: http://shelversanon.blogspot.com/2012/05/review-selection-by-kiera-cass.html ), and knowing about the whole dystopian love triangle/shallow romance thing ahead of time would have helped. I suppose I expected it all to be more intense than it was.