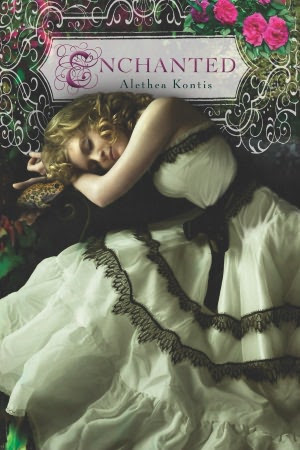 I have mostly positive things to say about Enchanted. I do have something negative to say, something that kept me from truly enjoying this one completely. But I think I'll save that for the end of the review.

The good news. If you enjoy fairy tales, then you should give Enchanted a try. This one isn't a retelling of one story specifically, more like a retelling of a dozen. With snippets from each fairy tale.
The more fairy tales you know, the more you'll recognize. Would the book have been better if the author had stuck just to one or two fairy tales? I'm not sure. That is NOT my place to say, really. Because while it could feel a bit scattered, it was scattered in a fun way. If that makes sense. If something is going to be crazy, you should try to see it as a good kind of crazy, right? And many of the details--especially details about some of her sisters--made me want more. (Monday and Thursday, I think were the sisters I was most interested in.) This story focuses mainly on Sunday and Wednesday. Though Saturday does come into a few chapters at least. Friday, I believe, is the one that interested me least. Though I'm not sure that's her fault.

Anyway, the good news is that this is, for the most part, a playful novel with an interesting premise. The premise is that Sunday Woodcutter, the seventh daughter, has a magical gift. I would feel horrible revealing this, but, it is on the book jacket. And this is a fantasy fairy-tale retelling, so "gifts" from fairies shouldn't be completely unexpected, right? Well, Sunday's gift is that her words come true. At first she believes that she only has this power through the written word--through her written stories. Which is SOMETHING to deal with--for better or worse.

So the novel begins with Sunday befriending a frog. And since the frog is a talking frog, and since Sunday isn't completely clueless, she has a very, very strong suspicion that this frog is an enchanted frog, perhaps even a prince. But what she doesn't guess--and won't really get around to guessing--is that this Prince is the enemy of her family.

There are a couple of charming things about this one. It did hold my interest. BUT. It was also confusing. I kept hoping that the big reveal would actually clarify things for me. But. No. That wasn't really the case. This could be a matter of me being a sloppy reader and just not getting it. But. I've read in other reviews that other readers had trouble making sense of things too. And that it was very confusing.

So. The big thing that confused me had to do with the Prince's father, the Prince's nameless father. It seems that NO ONE can remember his first name, and that there are also many other fuzzy details about this king and his reign. I wasn't sure if the King himself was evil through-and-through, or, if perhaps he was trapped or ensnared by this evil-evil fairy godmother, Sorrow. Or a bit of both. But the even bigger thing that confused me was the Prince's mental state. The "voices" he heard each and every night. Someone begging, begging, begging to be killed so they could be set free. Where was the voice coming from? Was it some message his father was trying to send him? Or was it some message from his mother? Or was it a message from someone else? At first, I thought it might be that there was something good in his father still remaining and that he wanted his son to find out the truth and set him free. But then after the big reveal, I became less sure. And when we learn the fate of his mother, well, I didn't know what to think of anything. (Same with Wednesday. Her role in all this.)

Anyway, the truth is that what I did understand, I did enjoy. But there was so very much I didn't understand, or understand fully.

Read Enchanted
© 2012 Becky Laney of Becky's Book Reviews
Posted by Becky at 8:57 AM

hm. I have this on my wish list and I can't decide if I should read what you didn't like or not... Do you think it is something that would bother me?