The Unpleasantness at the Bellona Club (1928) 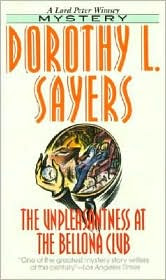 I definitely enjoyed The Unpleasantness at the Bellona Club more than Unnatural Death. It's just an enjoyable mystery. If you enjoy spending time with Lord Peter and Inspector Parker, you'll probably enjoy this one as much as I did! In this mystery, Peter has been asked to investigate the death of a club member, General Fentiman, whose body was discovered at the end of the day. No one at the club knows exactly when he died, though most think they know how he died. He was discovered sitting up in his usual chair reading his usual paper. But there is nothing ordinary about this private investigation. Lord Peter knows that his results will change lives. Why? Well. It's complicated. It's a matter of inheritance. For Lady Dormer, the General's sister, died on the same day. If the General died first, then Ann Dorland would inherit most of Lady Dormer's money, Major Robert Fentiman and Captain George Fentiman would receive a little money. If Lady Dormer died first, then the General would have inherited most of his sister's money. And with the General being dead too, well, that leaves his two sons quite a bit wealthier. But who died first? The Lady's death was discovered first. But that doesn't necessarily mean she died first.

So Lord Peter Wimsey is asked to help 'solve' this mystery. And at first, it is just a matter of determining when he died naturally. But some of the clues just don't make sense unless he died by unnatural causes.

Was it murder? Can Lord Peter Wimsey solve this case?

This was my first time to reread The Unpleasantness at the Bellona Club. And I think I appreciated it even more the second time. One of the suspects was a veteran from World War I, and the novel touches on just how much the horrors of war is still effecting him ten years later. It was so easy to care about the characters in this one.

"Acid man you are," said Wimsey. "No reverence, no simple faith or anything of that kind. Do lawyers ever go to heaven?"
"I have no information on that point," said Mr. Murbles dryly. (15)

"Peter Wimsey! You sit there, looking a perfectly well-bred imbecile, and then in the most underhand way you twist people into doing things they ought to blush for. No wonder you detect things. I will not do your worming for you!" (162)

Lovely review. Makes me want to go right out and get it.