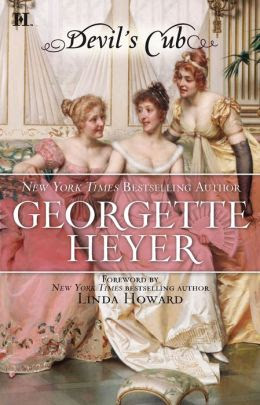 There was only one occupant of the coach, a gentleman who sprawled very much at his ease, with his legs stretched out before him, and his hands dug deep in the capacious pockets of his greatcoat.

Devil's Cub is the sequel to Georgette Heyer's These Old Shades. (These Old Shades is an adapted sequel of sorts to The Black Moth. All the names have changed from one book to another, the details and characterizations have not.) Leonie and Justin have a grown son who happens to fight duels somewhat regularly: a son who perhaps doesn't value human life quite enough. His name is Dominic (Vidal). And he's something. Does he take after his mother or father more?! That is the question. Either way, he needs some taming in order to be any woman's ideal husband.

Mary Challoner, our heroine, sees Dominic as TROUBLE. She doesn't want him for herself, certainly, and if she has her way, her sister won't have him either. Or should that be if Mary has her way, HE won't have her sister. For she fears that Dominic would never actually MARRY her sister, Sophie. Does she trust Sophie to do the right thing? NO. Mary feels it's her duty to watch out for her sister's reputation. So when Mary accidentally receives a letter from Dominic (Vidal), she decides not to pass the letter on. He's asked for a secret meeting--an "elopement" of sorts, telling her the time and place to meet him. Sophie knows his destination: Paris; but Mary hasn't a clue. She goes--disguised, wearing a mask--in her sister's place. Her true identity hidden at first, and then her true character hidden even more by a few lies she tells him. Perhaps Mary is not behaving wisely, but, she IS brave, opinionated, feisty, stubborn...even if she's not strong enough to prevent the kidnapping.

Does Dominic mean her harm? Perhaps in his initial rage...but it doesn't take him long to do something he's NEVER done before: offer a lady his name. He is willing to marry her, and quickly, and do whatever he can to make sure her reputation is spared, that most of the scandal is avoided. He is not only willing to marry her, he WANTS to marry her. For the more Mary engages in conversation with him, the more he realizes how wonderful she is. The more she holds her own, the more he WANTS her for herself. Not that he communicates this well exactly. For Mary doesn't know that Dominic "wants" her for herself and not just to save a lady in distress because it is honorable.

So much drama and excitement...and that's just one of the stories in The Devil's Cub. There are plenty of characters, plenty of subplots. So many ways to be entertained. Readers get reacquainted with these characters from These Old Shades: Justin and Leonie (duke and duchess of Avon); Lady Fanny Marling, Justin's sister; Lord Rupert Alastair, Justin's brother. We also meet Lady Fanny's son and daughter (John and Juliana). In fact, there is a second romance in Devil's Cub: Juliana and Frederick Comyn.

Loved this one from beginning to end! It would be WONDERFUL if Richard Armitage narrated this Heyer classic. He's narrated three other titles: Convenient Marriage, Venetia, and Sylvester.

Georgette Heyer is so much fun. I enjoyed this book too.