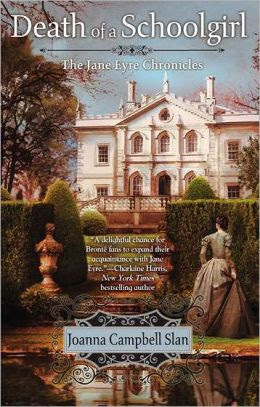 My expectations were low, so I was quite pleasantly surprised by how enjoyable this Jane Eyre mystery was. It may not be perfectly perfect from start to finish. There might be a paragraph or two here and there that bothered me. (For example, I didn't understand why Mrs. Fairfax was pushing Jane Eyre to take the family diamonds with her on her visit to Adele's school. Here she was going to check on the child's welfare, and Mrs. Fairfax is urging her to take jewels so she can dress up for her hosts in London?! I don't know if part of me thought it was foreshadowing--for better or worse--but when she put them in her reticule, I wanted to shout WHY are you traveling with expensive jewelry?!?! Why?! And sure enough--predictably enough--Jane Eyre gets robbed on her way to London. See! I told you not to take the family jewels!) But for the most part, I found the book to be an entertaining read.

Mrs. Rochester (aka Jane Eyre) is a new mother. She loves, loves, loves her new baby boy. But. When she receives a short letter from Adele with a French message included asking--begging--for help, she decides to leave her husband and son behind to check on Adele at her boarding school. If all is well, if it is just Adele being Adele, being childish and wanting her own way, then she may leave her at the school. If the school is less than ideal, if she does not like what she sees--how she sees the children being treated, if she thinks Adele's misery is justifiable, then she may take her out of the school. Because Jane Eyre was beaten up by the thief, because she doesn't particularly look RICH and IMPORTANT, she is initially mistaken as the new German teacher who was supposed to arrive several weeks earlier. That first day Jane Eyre is a bit flabbergasted and too overwhelmed to correct anyone. She has just learned that one of Adele's classmates was murdered. Eventually, one of the teachers convinces Jane that she should continue the deception, that she should resume her teaching duties temporarily and watch over the students herself. She debates what is best. Should she take Adele immediately to safety and let others solve the crime? Or should she become an amateur detective herself and work as a team with others to help solve the case?

Is Jane Eyre the best detective ever? Not really. But to me that almost doesn't matter. I liked spending time in her company. The setting intrigued me. I had never placed Jane Eyre in the Regency time period. But here we have the sequel set during the reign of George IV, and Queen Caroline, the scandalous Queen Caroline has not died yet. This places the book within a specific time frame. The sprinkling of historical details may not speak to all readers. Little details can be easily dismissed or ignored. But to me it's the little things that help ground a book. The book does deal with prejudices and judgments: how the lower classes feel about the upper classes, how the poor feel about the rich, how the rich feel about the poor, do they see them as human, are they compassionate and kind, or, haughty or cruel. One of the characters is VERY prejudiced against French people. Again and again we see characters making judgments or being judged. Sometimes the people that are being judged in certain situations are making judgments about others just a chapter or two later.

There were places I loved this one. There were places I merely liked it. But at times it just felt RIGHT. Maybe it didn't feel RIGHT cover to cover. But I read it quickly and enjoyed it very much.
© 2014 Becky Laney of Becky's Book Reviews
Posted by Becky at 9:54 AM

Glad that you enjoyed this one. I loved both of the books in the series and cannot wait for the author to write more.