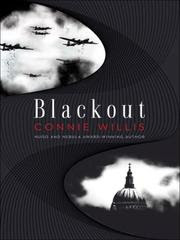 
This year I've decided to reread all of Connie Willis' time travel books. This is the third book I've reread. I've also reread Doomsday Book and To Say Nothing of the Dog. I first reviewed Blackout in November 2010. I reviewed it again in January 2012.


Blackout is about (three) time travelers studying World War II. For the most part, the novel is set in the year 1940. However, the novel also contains other stories--almost like riddles. These small stories are set in 1944 and 1945, they feature other characters--or do they?--studying World War II: V1 Rockets and V-E Day.

Merope Ward (aka Eileen O'Reilly) has gone back to study the evacuation of children to the country. She is working as a nurse/maid on a country estate. Her assignment was for the spring of 1940.

Polly "Sebastian" (she takes on a different Shakespearean last name for every assignment) has gone back to study the London Blitz. She wants to work as a London shopgirl. Her assignment was for the fall of 1940.

Michael Davies (Mike) has gone back to observe the Dunkirk evacuation. His assignment was for the summer of 1940.

Eileen, Polly, and Mike will question what they've all been told when they find themselves trapped in 1940 unable to return to Oxford and their own time. Eileen missed her deadline because of a quarantine initially. Months later she tried to use her drop and failed. She thought it was because there were too many people nearby--the military has just taken possession of the estate where she worked. She remembers that Polly Churchill will be in London soon. She wants to find her and use her drop to go back. Mike was injured during the Dunkirk evacuation. An injury that kept him trapped for weeks. His drop is also impossible to use. He remembers Polly's assignment. He goes to London desperate to find another time traveler. These three reunite only to discover what Polly already knew--her own drop was damaged--she thinks because of a bomb. She was hoping that THEY were there to rescue her. Being trapped changes everything.

Blackout is an intense read. Primarily the focus is on what war was like on the homefront, what the war was like for Londoners. I definitely recommend this one. But it does come with a warning. It is only half the story. All Clear is the sequel, and, you'll want to read it to finish the story. Blackout does not stand on its own.

I absolutely love these two books. They are so imaginative and yet historical at the same time.

I read Dooms Day Book while I was in England. Such a good book. I think I'd like these two books as well since WWII is a topic I enjoy reading about.