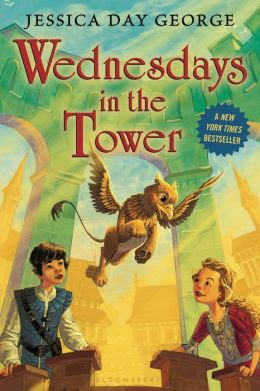 Even though it has only been two years since I've read Tuesdays at the Castle, I remembered very little about the characters and the plot. So I was hoping that Wednesdays in the Tower would not prove too tricky or challenging. Within pages, I was hooked. I read this one cover to cover without putting it down even once. I do have to say that it has a great opening which worked in its favor: "There are a lot of things that can hatch out of an egg. A chicken, for example. Or a dragon. And when the egg in question is the size of a pumpkin, and almost as orange, not to mention burning hot, you know that you're far more likely to get a dragon than a chicken."

Princess Celie and her family live at Castle Glower. The castle is without a doubt one of the more interesting in literature. This castle has a mind of its own. It does what it wants, when it wants. Usually on Tuesday is when it decides to add rooms, or, perhaps take away rooms. It isn't always adding or subtracting. Sometimes it's rearranging. One thing is for certain, only a handful of people know their way around all the rooms in the Castle. And Princess Celie is trying her best to provide a map or atlas of the ever-changing castle.

As I said, usually the castle is full of surprises on Tuesday. However, it is a Wednesday when Celie discovers a new room, and not just the room, but an egg. The castle leads Celie to this room again and again, but only when she's alone. Anytime she tries to bring someone else, to show them what she's found, it's vanished.

Essentially Wednesdays in the Tower concerns Celie and what hatches from the egg. Also about the magic of the castle as well, trying to understand how the castle works and why it does what it does when it does. In other words, the history of the Castle in general and how it connects with what hatched from the egg.

I found this a quick and enjoyable read. I liked Celie. I liked her siblings and parents. I liked getting to know her friends. I probably would have appreciated them all a bit more if I remembered Tuesdays at the Castle. But. Sometimes it's good to know that a book can be read alone or out of sequence.

The ending. Did it leave me wanting more? Yes. Was that how it should have been? I think so. Not that I'm a fan of cliffhanger endings. But. When the opening of a book and the ending of a book leave you wanting more it can't be a bad thing. Of course, if I'd read this book when it first came out, I might have felt frustrated. But the sequel will be out soon.