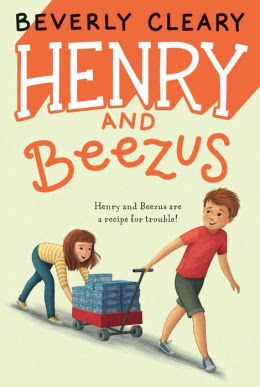 I definitely enjoyed rereading Henry and Beezus. Unlike the Ramona series, I've only read the Henry Huggins books once or twice. Henry Huggins, our hero, really, really wants a bicycle. His parents can't afford to give him one, and, he doesn't expect it of them. He doesn't feel entitled to it. If only there was a way to earn enough money to buy it himself.

"Henry and The Roast." Readers meet Henry and Ribsy, learn of his great desire for a bicycle, and witness Ribsy steal a roast from the neighbor's barbecue. Readers also meet Henry's nemesis: Scooter, a boy with a bicycle and a paper route. A boy who happens along just in time to "save the day" or save the roast and save Ribsy from a dog fight.

"Henry Gets Rich." Henry discovers abandoned boxes of gumballs. He needs Beezus' red wagon to carry them back home. But borrowing the wagon means getting Beezus and Ramona to tag along with him.


"Ramona," coaxed Beezus, "can't you play that game some other time?"
"What game?" asked Henry. He couldn't see that Ramona was playing any game.
"She's playing she's waiting for a bus," explained Beezus.
Henry groaned. It was the dumbest game he had ever heard of. "Doesn't she know it isn't any fun just to sit on a box?" he asked, looking nervously up and down the street. If only he could be sure no one else had discovered his gum!
"Sh-h," whispered Beezus. "She thinks it's fun and I don't want her to find out it isn't. It keeps her quiet." Then she said to her little sister, "If you get in the wagon, Henry and I'll pull you and you can pretend you're riding on the bus." (40)

Henry thinks the gum a great discovery. He can even sell it to all his friends and classmates. He can make some money for his bike fund. But the teachers aren't happy about all the gum. (Neither are the janitors). And he finds it increasingly hard to sell gum after the first day or two. Maybe the gum wasn't such a wonderful discovery after all.

"The Untraining of Ribsy" Henry has the opportunity to take over Scooter's paper route for a week. A dollar will help his bike fund that's for sure. But can he stop Ribsy from "stealing" papers on the route? Beezus and Ramona make an appearance in this chapter as well. In fact, it is Ramona who accidentally provides a solution.

"Henry Parks His Dog" and "Beezus Makes A Bid" Henry, Beezus, and Ramona go to a police auction. Henry's trying to buy a bicycle at the auction with his $4.04. (He had to spend a dime to buy Ramona a snack. He didn't want to stop at the store and "park his dog" outside, but, he had to do something to get Ramona to behave.) Will he get a good deal? Or will all the kids tease him?

"The Boy Who Ate Dog Food" Everyone is excited about the grand opening of Colossal Market. There will be prizes and free samples. Henry and his parents go. As do Beezus and her family, I believe. (I think all the neighbors go.) Henry is lucky and unlucky. He wins something. But the prize, at first, feels very unlucky. He won $50 of work at a BEAUTY SALON. He doesn't need manicures, waves, and facials. Everyone is laughing. Which leads him to accept a dare to eat dog food. But then he realizes that he can SELL his prize and get the money for what he wants most...