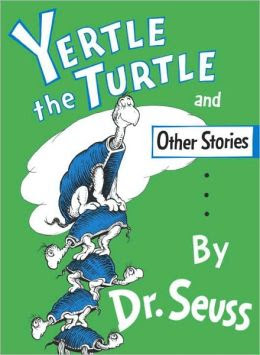 First sentence of Yertle the Turtle:


On the far-away island of Sala-ma-Sond, Yertle the Turtle was king of the pond. A nice little pond. It was clean. It was neat. The water was warm. There was plenty to eat. The turtles had everything turtles might need. And they were all happy. Quite happy indeed.


There once was a girl-bird named Gertrude McFuzz and she had the smallest plain tail ever was. One droopy-droop feather. That's all she had. And, oh! That one feather made Gertrude so sad.

First sentence of The Big Brag:


The rabbit felt mighty important that day on top of the hill in the sun where he lay. He felt SO important up there on that hill that he started in bragging, as animals will and he boasted out loud, as he threw out his chest, 'Of all the beasts in the world, I'm the best! On land, and on sea...even up in the sky no animal lives who is better than I!'

Premise/plot of Yertle the Turtle: Yertle the Turtle is king, but, he doesn't want to rule supreme over a small pond, so, he starts turtle-stacking to expand his kingdom. After all he "rules" over everything he can see, so the higher the better, right?! But what happens when the turtles below him start to grumble and complain?!

Premise/plot of Gertrude McFuzz: Gertrude McFuzz is jealous and foolish. She wants MORE feathers, beautiful feathers so she can be the most beautiful bird. Her uncle doctor gives her some advice--reluctantly perhaps knowing that she will go too far with her vanity. She starts eating a berry to make her grow tail feathers, and, well, she should have been wiser. Will all end well?

Premise/plot of The Big Brag: A rabbit and bear get into a bragging contest until a worm intervenes.

My thoughts on Yertle the Turtle: I liked Yertle the Turtle. I did. I wouldn't say it's my favorite or best. But it is a good story on selfishness and tyranny. I'm glad the turtles started speaking up and gained their independence!

My thoughts on Gertrude McFuzz: I liked Gertrude McFuzz too. I thought the story was a great lesson in being careful what you wish for and being content with what you have!

My thoughts on The Big Brag: Of the three stories in this collection, this is probably my least favorite. The bear and the rabbit are quite annoying. Of course, that is the point. Bragging won't win you friends and will just make you look foolish.

Have you read Yertle the Turtle and Other Stories? What did you think of it? Of the three stories, which is your favorite?

If you'd like to join me in reading or rereading Dr. Seuss (chronologically) I'd love to have you join me! The next book I'll be reviewing is Happy Birthday to You.