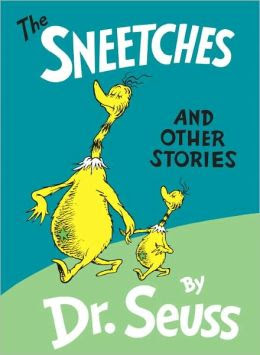 First sentence of The Sneetches:

First sentence of The Zax


One day, making tracks
In the prairie of Prax,
Came a North-Going Zax
And a South-Going Zax.

First sentence of Too Many Daves


Did I ever tell you that Mrs. McCave
Had twenty-three sons and she named them all Dave?

First sentence of What Was I Scared Of?


Well...
I was walking in the night
And I saw nothing scary.
For I have never been afraid
Of anything. Not very.

Plot/Premise of Too Many Daves: The premise of this one is simple and clearly stated in the first sentence: The McCave family has too many sons named Dave. The joy in this one comes from reading it aloud. All the names she wished she'd chosen. Names like "Hoos-Foos" "Putt-Putt" and "Oliver Boliver Butt."

Plot/Premise of What Was I Scared Of? The narrator of this one claims he's not scared of anything. But one night when he sees a pair of pale green pants with nobody inside them...he becomes very frightened indeed. Will he ever overcome his fear? Should he overcome his fear?

My thoughts on The Sneeches: This is a fun story. And it's so very quotable! This is a great start to a great story collection.

My thoughts on The Zax: Another fun story, and very true to life. Sometimes people are really that stubborn.

My thoughts on Too Many Daves: This one is shorter than the others perhaps, but, it's quite enjoyable! Some of the names are quite memorable too.

My thoughts on What Was I Scared Of? This one is probably my most favorite of all. I love, love, love this one. I had the record of this book, but, it is the audio narration of this one that has stayed with me the most. It is just a wonderful little story. And so quotable!!!


After that, a week went by.
Then one dark night in Grin-itch
(I had to do an errand there
And fetch some Grin-itch spinach)...
Well, I had fetched the spinach.
I was starting back through town
When those pants raced round a corner
And they almost knocked me down!


I ran and found a Brickel bush.
I hid myself away.
I got brickels in my britches
But I stayed there anyway.


I said, "I do not fear those pants
With nobody inside them."
I said, and said, and said those words.
I said them. But I lied them.

Have you read The Sneetches and Other Stories? What did you think of it? Did you like it? love it? hate it? Is it one you grew up reading?

If you'd like to join me in reading or rereading Dr. Seuss (chronologically) I'd love to have you join me! The next book I'll be reviewing is 10 Apples Up on Top.