Three Tales of My Father's Dragon 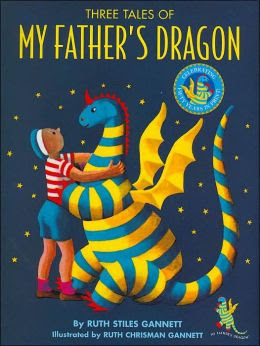 I loved the way My Father's Dragon opens:


One cold rainy day when my father was a little boy, he met an old alley cat on his street. The cat was very drippy and uncomfortable so my father said, "Wouldn't you like to come home with me?" This surprised the cat--she had never before met anyone who cared about old alley cats--but she said, "I'd be very much obliged if I could sit by a warm furnace, and perhaps have a saucer of milk." "We have a very nice furnace to sit by, said my father, "and I'm sure my mother has an extra saucer of milk." My father and the cat became good friends but my father's mother was very upset about the cat. She hated cats, particularly ugly old alley cats. "Elmer Elevator," she said to my father, "if you think I'm going to give that cat a saucer of milk, you're very wrong. Once you start feeding stray alley cats you might as well expect to feed every stray in town, and I am not going to do it!"

This opening hooked me. It is through the cat--his cat--that he learns of a baby dragon in desperate need of help. He tells of the Island of Tangerina and Wild Island. He learns about the captive dragon and the dangerous residents of the island. He is determined to help free the dragon. The cat helps him form a plan...

The first book is all about his going to the islands, his adventures and misadventures as he's looking for the dragon--it's a good thing he came to the island well-prepared! Does he find the dragon? You can guess the answer to that. Of course he does!

My Father's Dragon is a delightful fantasy book for very young readers. It's short and quite satisfying.

In Elmer and the Dragon, Elmer starts his journey home--by dragon. His new dragon friend will fly him home. But neither Elmer or the dragon know the way home precisely. Elmer ends up having just as many adventures returning home as he did running away from home. One of the stops along the way is Feather Island, the home of all 'lost' canaries.

In The Dragons of Blueland, the dragon sets off to return to his own family that he hasn't seen since his captivity. He's anxious to be reunited. But when he returns, he learns that his own family--his very large family--has been trapped in their cave. The entrance is guarded by men intent on capturing them or perhaps even killing them. He needs to find a way to help his family! So he seeks out Elmer...

All three books are great. It's oh-so-easy to recommend these.

I still have the copy of the first book which I read to my kids, and I look forward to reading it to the grandkids as they get a little older. I remember loving these books so much. Thank you for the review. I'm going to save it and read it again when I reread the books.