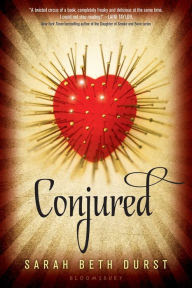 I definitely found Conjured by Sarah Beth Durst to be a compelling and surprisingly romantic read. What I enjoyed most about this dark YA novel is the mystery. Readers are kept clueless, just as clueless as the heroine herself. Her name, so she's been told, is Eve. What can Eve remember? Not much. And the two people "closest" to her, well, they're odd sorts. One, Malcolm, seems honorable enough, but still crazy mysterious. The other, Nicki, seems mysterious too, but, also antagonistic. Both seem anxious for Eve to recover her memories, but, are trying to pretend that it's no big deal, that the memories will come--or not--as they will. Eve definitely feels PRESSURE from almost everyone in her life.

Eve has, for better or worse, started a job at a library. She meets a boy around her own age, Zach. I would say that he's unlike any other boy she's ever met, but, since Eve has no memories at all of her past, and surprisingly few of her present, that would not be worth much. But Zach is special, and, he thinks Eve is very, very special indeed. Zach isn't the only "young person" she's met since leaving the hospital. She's also met a few others, that are STRANGE, STRANGE, SUPER-STRANGE.

Conjured is a book that celebrates MYSTERY. Eve is on a journey of self-discovery, and, the mystery she's trying to solve is herself...
© 2015 Becky Laney of Becky's Book Reviews
Posted by Becky at 7:30 AM