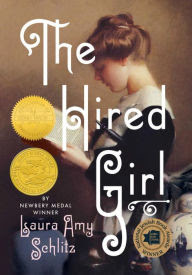 I definitely appreciated Laura Amy Schlitz's The Hired Girl. This historical novel is set around 1911, most of it takes place in Baltimore, though not all of it. The heroine, Joan Skraggs, is an interesting companion for readers. This fourteen year old is leaving school never to return. Oh, she wishes she could continue her education. Her mom dreamed big, and wanted Joan to become a teacher. But her father--don't let me get started on him!!!--has different plans for her. Plans that keep her on the farm and working day and night. Joan would never have contemplated running away from home unless provoked. Several things go wrong. Her asking for the egg money--politely and respectfully--begins the trouble perhaps. But after her father BURNS her books, her most beloved possessions, (Jane Eyre, Ivanhoe, and Dombey & Son) she sees no possibility of reconciliation. She reads in the paper that young girls can earn around $6 a week as a maid or hired girl. She thinks: if there's one thing I know it's how to do housework, I might as well get PAID to do the work. So she courageously leaves the only home she's known and sets off for the unknown, the big city....

JANET (a name change never hurts!) is fortunate that she is hired by the Rosenbachs. They have had trouble in the past hiring young girls and having them stay. Malka, who is like family, of course, isn't the easiest to get along with. And she is very particular and not always patient and kind and understanding. But Janet and Malka, after a very rough start, seem to be quite compatible. Janet soon finds herself becoming friendly with most of the family, though not all of the family! Janet becomes very friendly with the daughter and one of the sons. Also the father proves to be a kindred spirit of sorts.

The Hired Girl tackles religion straight-forwardly. Joan/Janet is a sometimes Catholic. Her mother was Catholic. Her father is--well, I already said I shouldn't talk about him--nothing. He wouldn't dream of entering a place of worship! And he doesn't really want her "wasting" her time on Sundays either. So she's never been instructed or confirmed in the church. She is hired by a Jewish family. And both through curiosity and duty she comes to learn about Judaism. (She has to learn what is kosher and what is not. There are right ways and wrong ways to do everything in the household it seems!) She is clueless in some ways about their faith and her own. But on her days off, she does seek to learn and grow in her own Catholic faith. That is until a cute boy enters the picture...

Personally, I could have done without the "romance" of this one. See conflicts happen when you're fourteen-pretending-to-be-eighteen.

There is a certain complexity to Hired Girl. It's an absorbing read. And I think it will prove a memorable one, though it is a little early to say for sure. The heroine is far from perfect. She can be at times smart and intuitive and at other times immature and clueless. But the fact that she is far from perfect isn't a problem for me. Her flaws make her seem oh-so-human.

Ooh, this one sounds intriguing. Adding it to my to-read list!

I love historical fiction. This one sounds interesting!