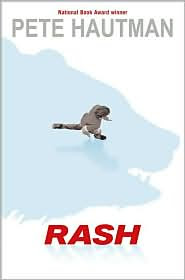 Rash by Pete Hautman is an enjoyable novel that is unique in many aspects.

Set roughly in the 2070s, Rash provides readers with a clever and imaginative look at the future. Opening, in my opinion, with one of the greatest first lines I've ever read: "Gramps, who was born in 1990, once told me that when he was my age the only way to wind up in prison in the USSA (back when it had only one S) was to steal something, kill somebody, or use illegal drugs" (3). But times have changed quite a lot since then as our hero Bo Marsten finds out.

"Back then there were five of us Marstens serving time: my father, my brother, two cousins, and an aunt. . .Most people don't like to talk about their jailed family members. It's embarrassing. But having five close relatives in the prison system is not that unusual. According to USSA Today, 24 percent of all adults in this country are serving time. My family was only slightly more criminal than average. . .Of course without people like us Marstens, there wouldn't be anybody to do the manual labor that makes this country run. Without penal workers, who would work the production lines, or pick the melons and peaches, or maintain the streets and parks and public lavatories? Our economy depends on prison labor. Without it everybody would have to work--whether they wanted to or not." (4-5)

Bo continues: "Anyway, here's my point: Given my family's history I should have known to keep an eye on my temper. Lose control for one tiny chunk of time and bam--next thing you know you're ripping the legs off shrimp. But at the time...Well, if you look at history, you will see that I was not the first guy to do something really stupid over a girl. Look at how many Greeks died for Helen of Troy. How much self control do you think they had?" (5-6)

Maddy Wilson. The girl who started it all. At least from Bo's perspective. When Bo sees Maddy getting a bit too friendly with the guy he dislikes, Karlohs, his natural reactions lead him into trouble. True, modern readers won't 'understand' what was so wrong with the altercation. After all, no physical violence occured. But in the 2070s, hurting another's feelings by name calling can be just as dangerous according to the law. Judge for yourself: 'She doesn't want anything to do with a pretentious droog like you,' I said, getting right in his face. 'So leave her alone, okay? I don't want your disgusting dog-anus mouth anywhere near her, understand?' Karlohs staggered back as if he had been struck. I felt a moment of satisfaction followed immediately by a sick feeling. I knew I'd gone too far, even though it was true--his mouth really did look like the south end of a beagle. But verbally attacking someone's physical appearance is a class three misdemeanor. Then I watched as Karlohs's eyes went glittery and his anus lips spread across his face in a smile. I picked up my helmet, turned, and walked away with a lead weight in my belly and a prickling on the back of my neck. I already had two violations on my record. Three strikes and you're out. (14-15)

His sentence is handed down several chapters later: "Because I had refused to offer a plea, the judge reviewed my case and my record, asked me a few questions, then handed down an instant judgment: Guilty, guilty, guilty, guilty, guilty, guilty. She sentenced me to three years, let that sink in for a few seconds, then suspended the sentence and told me I could go home. . . You have been tried, judged, and sentenced. However, I am waiving the requirements that you serve your sentence. You will remain free so long as you commit no further criminal acts between now and your nineteenth birthday. . .At the moment you remain free at the pleasure of this court. In other words, the next time you get in trouble, you will be incarcerated. One more verbal assault, one more reckless act, one more instance of self-neglect, and it's off to the rock pile" (68).

It doesn't take a genius to predict that it would practically impossible for a sixteen year old boy to control his temper 24 hours a day, 7 days a week, for 3 years. And sure enough, when he sees Karlohs Mink with his arms around Maddy at the local mall...his brief glimpse of freedom and a future fade away in rage.

Now Bo is being sent away to Prison 387 owned by the McDonald's Rehabilitation and Manufacturing Corporation and located in Canada after all "since the USSA annexed Canada during the Diplomatic Wars of 2055" most of McDonald's prison factories were moving up north.

According to Gramps, McDonald's used to only sell food, back when French fries were legal. But in the 2020s, they merged with a suv company called General Motors under the name the McMotor Corporation of America. A few years later, McMotor was bought by a Chinese company called Wal-Martong. In 2031, during the Pan-Pacific conflict, Wal-Martong was nationalized and privatized by the USSA government and renamed the McDonald's Rehabilitation and Manufacturing Corporation. I guess I learned something in school after all. For all the good it would do me. For the next three years, I would be a worker drone for McDonald's. They would use me however they saw fit, and there was nothing I could do about it. (86-87)

Prison 387 made frozen pizzas for McDonalds. You are no doubt aware of the retro craze for hand-tossed pizza. Until recently most people thought of pizza as just another old-fashioned grandma/grandpa food, like oatmeal or hamburgers. Most towns still have one or two old-fashioned pizzerias that cater to the geriatric crowd, but nobody I knew ate the things until recently, when Keanu Schwarzenegger told PeopleTime magazine that he enjoyed a hand-tossed, hand-topped sausage pizza during breaks on the movie set. That's how these things get started. (102)

But the lessons Bo learns about life, friendship, pizza, and football--which is also illegal by the way--open up his eyes to a whole new world. Prison life may not be easy, in fact it could be deadly, seeing as to how polar bears prowl around the fences of the prison, but Bo must learn to cope and adjust. And as he does so, the reader is taken on a very enjoyable journey.

http://www.petehautman.com/
Posted by Becky at 9:57 AM

Labels: "H" Authors, "R" Titles, dysfunctional families, teens in trouble with the law, YA Fantasy, YA realistic fiction, YA Sports