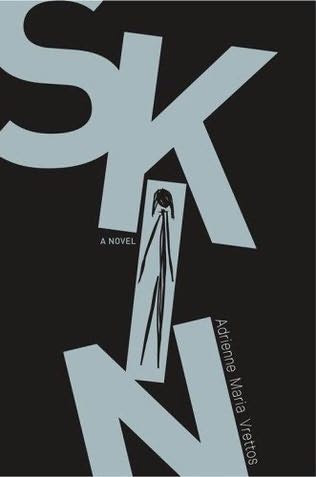 Narrated by fourteen-year-old Donnie, SKIN is a heart-breaking story of a family in crisis. The first chapter opens with his sister's tragic though not unexpected death due to an eating disorder. The rest of the book tells the before and after effects of that disorder and her death.

I'm telling you this because you didn't ask. I've got it all here, growing like a tumor in my throat. I'm telling you because if I don't, I will choke on it. Everybody knows what happened, but nobody asks. And Elvis the EMT doesn't count because when he asked, he didn't even listen to me answer because he was listening to my sister's heart not beat with his stethoscope. I want to tell. It's time to tell. Even if you didn't ask, you have to hear it (4).

Karen, his sister, wasn't always like this. There was a time when she was normal. When she liked to have fun. When she liked to laugh. When she liked to eat. Donnie shares the good and bad times of his sometimes dysfunctional family. Beginning with his parent's turbulent marriage--arguments that go on for days, screaming matches, etc., and describing how through all of the chaos his sister was his anchor. His safe place to fall. But as the months progress even Karen begins to disappoint him. First she abandons him (his perspective) to be with her new best friend, the neighbor across the street, Amanda. Then as if that wasn't bad enough his own friends abandon him as well suddenly becoming 'too cool' to hang out with such a loser.

I wish they'd just sat down at the beginning of the school year and said, 'You're out,' instead of deciding together to drop me and waiting to see when I'd notice. If they'd done that, sat me down and told me, I would have laughed in their faces. I would have gotten up and walked away and left them sitting there to realize what they'd just done. It's not like there's a whole line of kids waiting to be friends with us, clamoring to take my place. We're the end of the line. We're the ones that people look at and think 'at least I'm not them.' Kids get a death grip on their friends when it looks like they might be slipping down to where we are. It's like a kick in the balls, when people use you as a threat, when you hear someone say, 'Stop being such a douche bag or we'll make you go sit with LePlant and the other freaks.' . . . Nothing about us is right. We're the wrongest kids you've ever seen. Our faces are wrong with zits, we have the wrong hair, the wrong clothes, and I think we might be ugly. Our families are wrong because none of us are rich, our bodies are wrong because we suck at sports, and there's something really wrong with all of our personalities, because nobody likes us, not even the teachers. Teachers make fun of us too, and think we don't notice. (21-22)

I'm becoming invisible. Every day more and more light shines through me. I think about writing Karen at the hospital and telling her. If I wrote her and told her I was becoming invisible, I think she'd tell me to stop being so dramatic, and she'd say that she understood. Once I realized that I was becoming invisible, once I realized that no one really noticed me anymore, I stopped fighting it. I stopped taking the tiny bit of room they left for me on the bench at the lunch table and sat by myself at the end of the teacher's table, which is pretty much the worst place any kid can sit, ever. Unless that kid's invisible, and then it doesn't matter. Every day since Karen's been gone, I practice floating through the school halls like a ghost. I don't touch anyone and I imagine that the times I do brush up against their arms it feels like a clammy, cold breath on their skin. I sit in the back of the class and I don't raise my hand. I ignore everyone, even the teachers. Not the kind of ignoring where you jut out your chin and hope that everyone notices you ignoring them. I ignore them like we're not even in the same universe. I ignore them because it's easy: I'm not even here. My goal is to get through the whole school day without anyone talking to me. I decide once I do that, I'll become a superhero. I'll become Donnie Disappeared. (119-120)

Even after Karen's death, Donnie remains invisible. His parents trapped in ever-going arguments about whose fault everything is continue to ignore him until one day he snaps.

Skin is an emotional novel, a powerful one, a story with ups and downs, hopes and fears, losses and gains.

Other fiction books about eating disorders include Just Listen by Sarah Dessen and Mercy, Unbound by Kim Antieau.

Another fiction book about young teens feeling invisible is Neal Shusterman's The Schwa Was Here.

Other fiction books about grief include: Maybe by Brent Runyon, Looking for Alaska by John Green, Saving Grace by Katherine Spencer, Kira-Kira by Cynthia Kadohata, and What is Goodbye by Nikki Grimes.

http://www.adriennemariavrettos.com/index1.html
Posted by Becky at 10:51 AM