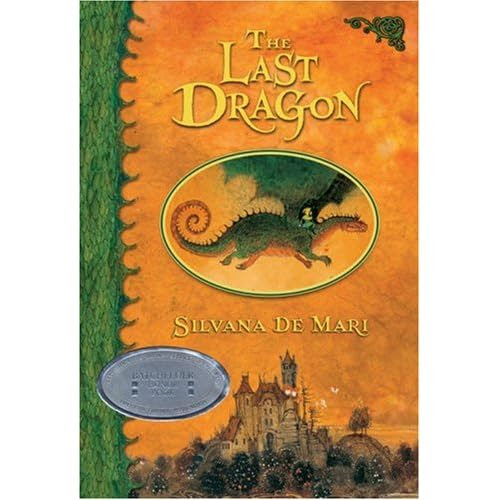 Recently was recognized as Mildred L. Batchelder Honor Book for 2007.

Yesterday, I spent quite a bit of time discussing the award-winning title THE PULL OF THE OCEAN. I didn’t feel it had much merit. Granted, I don’t read extensive amounts of international literature so I don’t know what the competition was like this year. But I do know an overrated, much-too-clever-for-its-own-good book when I see one. And one of my all-time favorite books THE LEGEND OF THE WANDERING KING is an international book from a Spanish writer, Laura Gallego Garcia. (Not to mention The Diary of Ma Yan which was translated first into French and then into English). So I know that there are good books out there being translated...just look at Cornelia Funke, a German writer. But I am digressing.

Focusing on the book in hand, THE LAST DRAGON was a treat of a book. I won’t lie. It’s not a perfect book. But it has something going for it: it’s generally entertaining. Yes, some of the jokes and gags might have lost something in the translation. But throughout, it is an interesting, FUN, book. If you can look past a few running gags or punchlines that get a little old after the third or fourth time, you’ll find yourself lost in the story of an elf...the last elf. Yorsh, when we first meet him, is a ‘baby’ elf. He’s new to the world, and not the brightest fellow. He’s confused. He makes mistakes. Some funnier than others. He can cause lots of mischief without really meaning too. It’s not his fault. He just doesn’t know any better. His mother died and his only memories are of his grandmother grieving the loss of her daughter. He has no memories of his father--he just knows he’s dead--perhaps even dead before his birth. So he is the ‘last’ elf on earth. An earth ravaged with floods and wild weather. When he and his two human companions find a prophecy about the ‘last elf’ meeting the ‘last dragon’ and saving the world...he has hope for the first time in his life. Now on a quest, Yorsh is out to save himself and the world. Can two humans and an elf set out to fulfill the ancient prophecy? What will they find when they venture into the mountains where dragons are supposed to dwell?

The Last Dragon is divided into two parts. However, as a reviewer I can’t really review both parts without spoiling everything. Needless to say, the first part of the book deals with the first half of the prophecy, and the second part set ten to twelve years later fulfills the second half of the prophecy. Two parts, two different quests, one very entertaining book. It has humor. It has adventure. It has a teeny bit of romance.

The book is translated from the Italian by Shaun Whiteside.
Posted by Becky at 11:29 AM

Got your comment. I've bookmarked you and will add you in my next roundup, which will be soon. I'm trying to wait until at least Feb, but there are so many I'm ready to mention!!

I really loved this book!