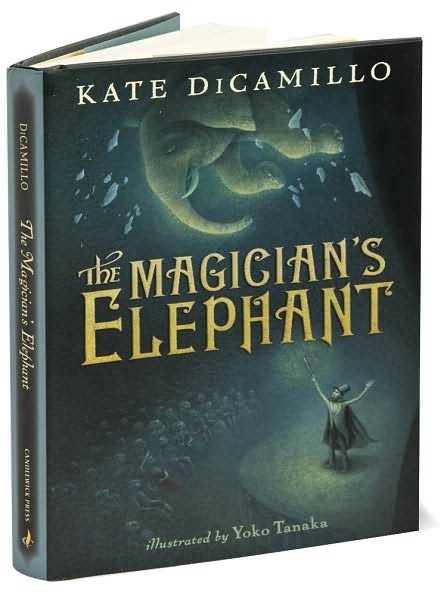 At the end of the century before last, in the market square of the city of Baltese, there stood a boy with a hat on his head and a coin in his hand. The boy's name was Peter Augustus Duchene, and the coin he held did not belong to him but was instead the property of his guardian, an old soldier named Vilna Lutz, who had sent the boy to the market for fish and bread.

I loved this one. I did. It's Kate DiCamillo. If you're not familiar with her children's books, you should be*. You really should be. Because she is just that good, that amazing. Will everyone find this book to be the most-amazing-book-ever, no, I'm not even sure (as much as I loved it) that I'd go that far, get that carried away. But chances are one of her books will be the right book for you, and you'll have discovered something wonderful.

In this delightful book, we meet Peter. A young boy with a few tough decisions to make. When a fortuneteller appears (out of nowhere it seems), he must decide whether to spend his guardian's coin as he should or as he could. He's tempted, you see, by this promise: The most profound and difficult questions that could possibly be posed by the human mind or heart will be answered within for the price of one florit.

It would be a very short book indeed if Peter just bought fish and bread like he was told. So it shouldn't come as a great surprise when he gives into temptation and does what he barely dares....to visit the fortuneteller to find out the answer to a question that has been haunting him for years.

But what kind of an answer is that? What elephant?! It's not like elephants are to be found on every street corner! There are no elephants in Baltese! But she tells him (the fortuneteller that is) that the truth is forever changing. What's a young boy to do? Can the unexpected happen? Is something remarkable about to happen?

As I said, I loved this one. I thought it was beautifully told. I also enjoyed the illustrations by Yoko Tanaka.

*Because of Winn Dixie; The Tale of Despereaux, The Miraculous Journey of Edward Tulane, and The Tiger Rising. There's also a series of books for much younger readers, Mercy Watson, but I have a feeling these wouldn't translate as oh-so-amazing for adult readers. Though I could be wrong. I *haven't* read any of these Mercy Watson books myself.

© Becky Laney of Becky's Book Reviews
Posted by Becky at 9:08 AM

I really enjoyed this book.

I loved this one too. In fact, I have the urge to read it again, and that rarely happens to me. Usually I read it and I'm done and that's that. But this one, I feel like I want to read to study how she DOES that - how does she make us believe an elephant actually fell through the roof? :)

I havent read this yet, but I have had my eye on it! I will have to pick it up I love some of Kate's other books!

I'm so glad that you enjoyed it Becky!! I think that this one became my new favorite DiCamillo after I finished it...there was just something about the atmosphere of this one that was so wonderful. Just loved it!

Ha! Mercy Watson is the only DiCamillo I consistently enjoy. Her stuff usually doesn't click with me for some reason. But, you have to like a porcine wonder who eats a lot of buttered toast.

L, I think you'll enjoy this if you can find it!

Jennie, I haven't picked up Mercy Watson yet. :) But you might just encourage me to seek it out as well.

I loved the lyrical writing but wasn't crazy about the story.

I read this book during the summer, and as much as I love Kate DiCamillo, I could not bring myself to love this book. So, I appreciate reading your review and the positive points you make. Maybe I need to reread this book.

You've convinced me to give this one a try. Thank you!

Playing by the book said...

I've just been reading about The Tale of Despereaux - didn't know about it before (my kids are younger), but having read about it, The Magician's Elephant certainly sounds like a good bet too for when my kids are a little older :-)

I am still not feeling all that for this book. The artwork is very nice, but the story was just ok.

You know, I'm thinking I would describe this book as "atmospheric." Thanks for the review!