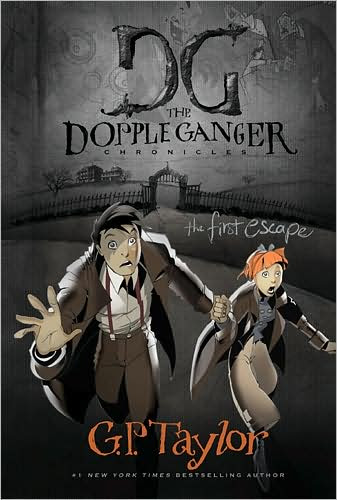 In the dining room of Isambard Dunstan's School for Wayward Children, all was not well.

This is a strange book defying all my categories. It's not a traditional novel--roughly half of it is told in graphic (illustrated) form. But it's not a traditional graphic novel either since a good bit of it is in prose. It's published by a Christian publisher, but, for the most part except for one little scene I would say that you'd never be able to tell it was "Christian." What it is, without a doubt, is an action/adventure story.

What I noticed from the start was the writing. Taylor really knows how to set the mood and tone.

Shards of lightning blasted from a black morning sky and burst upon the heath outside. Rain beat and battered against the lead windows that reached upward in vast stone arches. Staring down upon a sheltered gathering of children was the pointed face of Isambard Dunstan himself. The noted explorer's likeness had been captured in stain glass for two hundred years, a look of dread upon his face and a scowl upon his lips. He had left the house to be a home for children abandoned by their parents, but no one who had the misfortune to live there was sure whether his action was a blessing or a curse. (1)

His descriptions have a way of not only telling but showing as well.

A large wooden door swung open and a fat cook barged through.

In her stubby fingers she carried a massive post of brown gruel that steamed and gurgled like the rumblings of a cow's belly. She glanced up at the image of Isambard Dunstan, who scowled at her as she began ladling the food from the dirty tureen into 166 bowls.

Every eye gazed hungrily. Sniveling noses sniffed each bowl as it was passed from one hand to the next. Fingers dipped quickly into the gruel and then popped into mouths as each child waited to begin breakfast.

"No one eats!" screamed the cook, spitting the words from her toothless mouth. "You eat when I eat and not a moment before." The fierce look on her face dared anyone to take one morsel without her permission. If there was one thing Mrs. Omeron hated more than children, it was children who ate before she did. (3-5)

This one just had a way of drawing me in and making me want to read more. He hasn't even introduced the main characters yet but I'm hooked all the same.

Who are the stars of this one? Twins. Sadie. Saskia. Known to everyone at that place as Them. These Dopple twins are about to be put through a series of tests or hardships as they face separation for the first time. One of them is about to be "adopted" by a mysterious woman. The other is left in the "safety" of the school. The truth is both twins are about to face danger. (The remaining twin has the fortune of befriending a boy who just happens to be named Ganger. Erik Ganger.)

The art. This one is heavily illustrated for a traditional novel. Black-and-white illustrations are sprinkled throughout, and almost every chapter has a graphic novel portion that is illustrated in full color. There is very little "tradition" maintained in the layout of this one. (Even pages without any "art" are bordered or framed in black. There are also a sprinkling of pages that are black with white font/white text.) My guess would be this is all part of a master plan to keep this one engaging and appealing to readers.

Did I like this one? Yes and no. I thought it was uneven in a way. I thought it had a very promising start. The writing, the descriptions, the humor. But by the end of the book, I was finding it a bit tiresome. I'm not sure if this is all on me. If my mood just changed or what. It has action, adventure, humor, suspense, a bit of mystery too. All the elements that would make this one work. At least potentially work with its target audience.

Thanks for the review. I love books that are a bit odd like this, where you just can't quite figure out how to describe them becuase they're not like anything you've run across before. And I like the cover.

I have read the first two books in this series and I liked them. I get what you are saying though. :)