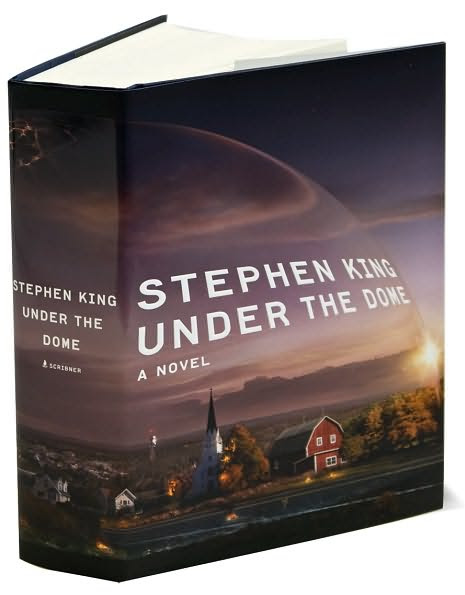 From two thousand feet, where Claudette Sanders was taking a flying lesson, the town of Chester's Mill gleamed in the morning light like something freshly made and just set down.

How many books can you think of that make you thankful--really thankful--for fresh air, for oxygen?

Stephen King's Under the Dome is quite a book. At over a thousand pages, it has plenty of drama to offer readers. King's message that absolute power corrupts absolutely is well played out in its pages. As readers meet some really dirty, really corrupt, downright evil politicians.

The book begins by introducing us to Dale Barbara, one of the heroes--one of the good guys; he is on his way out of town. After having one too many confrontations with "Junior" the son of the most evil politician (who just happens to be a used car salesman too) in town, Barbie has decided he's had enough. It's time to move on. And quickly. But. He never makes it out of town. Something stops him. The dome. On the day the dome appears (October 21), life changes dramatically and drastically. The dome isolates this little town. No one can get in or out. In fact, nothing can get in or out. Not water. Not wind. Not rain. Not air. (Not much air at any rate.)

What's to keep the residents from panicking? Not much! Especially with Jim Rennie in charge. In fact, he thinks Dome Day is just about the best thing that ever happened to him. Suddenly, he's the guy in charge. There is no one to stop him. He can implement anything in the name of "doing good for the city" and who can challenge his authority? The fact that the President of the United States has chosen Dale Barbara to take command? Not gonna stop Big Jim! It's just one more reason why Barbie (or Baaarbie needs to be taken care of). And Barbie knows it. As do his friends.

I imagine it has enough appeal for readers of horror and readers of science fiction. Is it for everyone? No. I don't think a book has to be for everyone. This one has plenty of horrific details. The language. The graphic nature of death and violence and sex and drug use. It's going to turn some readers off. Also this one could definitely be offensive to those who are religious. King's depiction of Christianity is abrasive, harsh. (No question about that!) What I wasn't expecting exactly in this very dark, very horrific book is the humor. (Though it was often a dark sense of humor.) Like this description of a trucker colliding with the Dome:

The trucker might have been overloaded and moving too fast, Barbie thought, but at least he was getting a Viking funeral. (41)

Or this one of an unlucky farmer:

On God Creek Road, Bob Roux had been digging potatoes. He came in for lunch (more commonly known as "dinnah" in those parts), sitting astride his old Deere tractor and listening to his brand new iPod, a gift from his wife on what would prove to be his final birthday. His house was only half a mile from the field he'd been digging, but unfortunately for him, the field was in Motton and the house was in Chester's Mill. He struck the barrier at fifteen miles an hour, while listening to James Blunt sing "You're Beautiful." He had the loosest of grips on the tractor's steering wheel, because he could see the road all the way to his house and there was nothing on it. So when his tractor came to a smash-halt, the potato-digger rising up behind and then crashing back down, Bob was flung forward over the engine block and directly into the Dome. His iPod exploded in the wide front pocket of his bib overalls, but he never felt it. He broke his neck and fractured his skull on the nothing he collided with and died in the dirt shortly thereafter, by one tall wheel of his tractor, which was still idling. Nothing, you know, runs like a Deere. (34)

Expect plenty of drama and devastation. But I found the book to be an engaging read.

I was truly wondering how you would review this book. It keeps popping up and I saw that you were reading it, sounds like an engaging book, thank you!

I've heard King is "back" to form with this book ... the premise is awesome. I've heard good things about it ... so perhaps I'll eventually try it out. What a page commitment though!