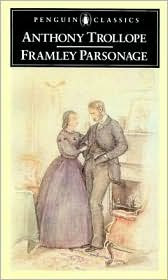 First sentence: When young Mark Robarts was leaving college, his father might well declare that all men began to say all good things to him, and to extol his fortune in that he had a son blessed with so excellent a disposition.


Framley Parsonage is the fourth in the Chronicles of Barsetshire series by Anthony Trollope, one of my favorite bearded Victorians. The first three are The Warden, Barchester Towers, and Doctor Thorne. I wish I could say that I absolutely loved it. That Trollope didn't disappoint in any way. But. I can't quite say that. Not this time around. I enjoyed Framley Parsonage. I enjoyed visiting some of my favorite characters from previous novels--Mr. and Mrs. Proudie, Mr. and Mrs. Grantley, Lady Arabella, Miss Dunstable, Dr. Thorne, Mr. and Mrs. Gresham, etc. I enjoyed meeting Mark Robarts, his wife, Fanny, and his sister, Lucy. (Lucy was my favorite new character.) I found Lady Lufton to be quite a character. And her son, Lord Lufton, had his moments. There were some great scenes in this one. Some very dramatic. Some very romantic. Some very comedic. But despite how much I almost loved this one, it stayed an almost throughout. I did like it. I am glad I read it. 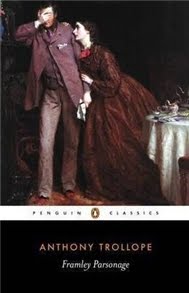 Mark Robarts should have known better. That's the truth. He should have NEVER signed his name to his friend's bill. For Mr. Sowerby is no friend of his. You would think that after watching his friend, Lord Lufton, be cheated out of money by Mr. Sowerby that he would have known better, would not have been so gullible, so foolish, so silly. But. Mark Robarts does not always make wise decisions. In fact, he can be very foolish. Good thing his wife and sister are so wise, so compassionate, so forgiving. I enjoyed spending time with Fanny and Lucy. I thought they were great characters. I spent most of the time wanting to scold Mark, however. (Though his transformation by the end into a man of character did help me like him better.)

"A man's own dinner is to himself so important that he cannot bring himself to believe that it is a matter utterly indifferent to every one else. A lady's collection of baby-clothes, in early years, and of house linen and curtain-fringes in later life, is so very interesting to her own eyes, that she cannot believe but what other people will rejoice to behold it." (123)

"A man always can do right, even though he has done wrong before. But that previous wrong adds so much difficulty to the path--a difficulty which increases in tremendous ratio, till a man at last is choked in his struggling, and is drowned beneath the waters." (150)

"If the ears be too delicate to hear the truth, the mind will be too perverse to profit by it." (181)

"I think it is more proper-looking, and better suited, too, for the world's work, when it goes about with some sort of a garment on it. We are so used to a leaven of falsehood in all we hear and say, nowadays, that nothing is more likely to deceive us than the absolute truth." (290)

"A man does not wish to marry a statue, let the statue be ever so statuesque." (301)

"All unmarried women are necessarily in the market; but if they behave themselves properly they make no signs." (451)

"Think about the happiness of those around you, and your own will come without thinking." (480)

Regarding the idea that we all "long after a naughty thing" I was seriously craving chocolate just before I read your post. Now I feel inspired to give into such longing. (Think I'll go see if I can find some.)

One day I need to read this author...

I've just read The Warden and have Barchester Towers on my TBR shelf, so this was a taste of what's to come. I loved your collection of quotes--I think what I miss most in modern fiction is the lack of really good quotable quotes.

This was my favorite: "It would be a terrible curse to have to talk sense always." That's a bumper stick for sure.