Thirty years ago, Marseilles lay burning in the sun, one day.

Arthur first meets 'Little Dorrit' in his mother's home. He is returning from a LONG absence, returning after his father's death. His parents marriage being a disaster, he spent part of his time with his mother in England, part of his time with his father in China. Little Dorrit (Amy) is quiet, not one to call attention to herself. But there is something about her that intrigues him. So he sets out to befriend, to learn all he can about her. What he learns is that she was born to her father and mother in Marshalsea--a debtor's prison. Her father has been a long-time resident. She's never known freedom, she leaves the gates most every day to earn what she can--she's a good seamstress, happy to find work where she can, like at the Clennams. But to Marshalsea she returns each evening before the gates are locked. She's happy to have a friend in Arthur. But while she may think of him as something-more-than-a-friend, he's settled into thinking of her as a daughter. He's twenty years older than Amy, and, well, he's not the smartest of men when it comes to realizing the obvious. (He has to be TOLD by someone he barely knows that Amy is in love with him, has always been in love with him.) He decides that the best way to help Amy is to help get her father out of debtor's prison. So with the help of a few friends, he sets out to do just that. But is Amy suited to riches?! Does society really hold a place for Amy, Fanny (her older sister), Tip (her older brother), her father, and her uncle? Can money buy happiness? Can money redeem past wrongs? What do you think?! 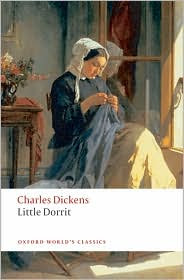 The minor characters and subplots didn't thrill me in Little Dorrit. Don't get me wrong, there were times when I found it very comical. Dickens had a good sense of humor. And there are some great sketches of characters here and there. Arthur's old love-interest, for example, is almost always good for a laugh. Though it is a laugh at her expense. And Mr. Sparkler, Fanny's love interest, is good for comic relief too. There's a scene between him and Fanny--after they're married--that had me laughing a great deal! (And just when I needed it too!) And Little Dorrit offers a certain amount of drama--drama that for me might have been spoiled by having seen the adaptation two years ago. I thought that the book would clarify things for me, that characters that didn't make a lot of sense in the film would become clearer when I read the book. But I didn't find that to be the case. There are still pieces of the puzzle that I'm missing. There are still characters that leave me confused and puzzled. Which I suppose is why Little Dorrit isn't a book that I can love, love, love. However, I do like it. I am glad I read it.

*Not including GREAT EXPECTATIONS which was required reading in high school. Or A Christmas Carol which is so familiar that I'm not sure it should count.

You should definitely count A Christmas Carol! I also think required reading counts... because it's still reading. :)

I like Dickens, but this one hasn't seemed appealing. I read Oliver Twist last month, and I'll be reading David Copperfield later in the year. I'm definitely planning to get to Our Mutual Friend someday soon, too.