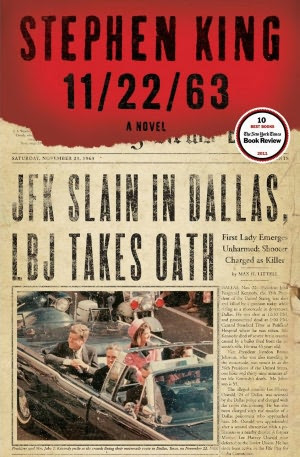 I have never been what you'd call a crying man.

This is the second Stephen King novel I've read, and honestly I'm not sure how I'd compare the two I've read: Under the Dome and 11/22/63.

In Under the Dome, the violence is graphic, and the bad language proved problematic...for me. But, oh, the tension. It was such a compelling read. The pacing was amazing. It really was. It was a page-turner. I didn't like the characters particularly. I hated some of them--granted, some of them were evil incarnate. But I HAD TO KNOW what happened next. The premise, well, it was horrifying and intriguing all at the same time.

11/22/63 was in many ways a tamer novel. Less violence, less bad language (though it's still there to a certain degree. I am NOT claiming this is a clean read.) But. Well, how can I say this? For me at least it lacked tension. The premise of time travel should have been wowing me from start to finish. But it didn't. The only one that had to deal with consequences--in my opinion--was the narrator Jake Epping who time-traveled under the name George Amberson. So long as he remained alive and able to return to 2011 through the time-bubble, all other mistakes, all other consequences just didn't matter at all. Not really. Sure, they mattered to him. He, personally, felt those mistakes and had his struggles and doubts. But no one else could ever know the difference between worlds and alternate realities.

I'm not sure how I really felt about the narrator, Jake/George. On the one hand, his "good angel" intentions of playing God and determining the future and making the world a better place by preventing a handful of tragedies were understandable. I mean if you could prevent a death by time-travel, shouldn't you? Jake knew one person whose life was forever-changed one Halloween night when his drunken father came home and murdered his mother, his two brothers, and his sister. He was the only one to survive--and only because he was in the bathroom when the killing spree began. But he saw too much--much too much--and his father tried and failed to kill him too. So when Jake discovers this time-travel-bubble that automatically sends you to September 1958--almost a full month before this tragedy--he feels like he has to "fix" things. He has to test time-travel to see if he can change things...for the better.

But Jake/George's main goal, his main mission, is not to save his friend from a horrible childhood, but to save "the world" or "the nation" from experiencing the tragedy of Kennedy's assassination. A world where Kennedy continued his term (and was reelected) as president would have to be a better world than the one we now live in, right? Especially if you're tempted to think he was the best human, best leader, best politician, best president ever, ever, ever. To think that he was the best, smartest, wisest, kindest, strongest.

So that is his mission: prevent JFK from being assassinated. And, to a certain degree, King stays on task. But his idea of staying "on task" isn't the most thrilling way to spend your time. Readers are treated to five years (at least) of Jake/George living in the past. And part of the focus is on his mission, but much of it is not. Part of it is focused on his career as a teacher/mentor. Part of it is focused on his 'career' as a writer as he prepares a manuscript or two. Part of it--a large part of it--is focused on his finding his one, true love. Yes, a good part of 11/22/63 is a romance novel with focus on feelings, dancing, and secret weekend hideaways.

While many elements of the story are nice enough in their own way, they don't necessarily add up to the most compelling, most page-turning read ever. I suppose there are several questions that could keep you reading--Will he successfully stop the assassination? (Hint: Don't look at the back cover.) Will he get to stay with his one, true love? Will he stay with her in the past? Or will she go with him to the future? Will this divorced teacher find his happily ever after? But none of those were quite enough for me.

The one area this novel worked for me--and I'm not even sure if this was the intent--was seeing this novel as a test for one man, to see how selfish or selfless one man could be. I can't say more without spoiling it. But essentially he's asked to choose between his own happiness and the greater good of the world at large.

I suppose this one also treats morality and ethics. Do two wrongs make a right? Does shooting a murderer before he's murdered anyone make your murder moral? I also saw this one as dealing with humans playing God. Here we have one man who is determined to remake the world into a "better" place. But what he didn't take into account is how tragedy shapes us. How tragedies and sorrows and struggles shape our character and develop us. I thought of so many scenes from Orson Scott Card's Worthing Saga.

Part of me really, really wishes that more time had been spent on alternate presents. The ending felt incredibly rushed and not completely believable.

I've been on the fence whether or not to read this book but I think I will after this review. I did see a documentary once where they tried to analyze what would have happened if JFK wasn't murdered.

This is a really great review, Becky (thanks for linking to it over on the Chunkster blog). I hope you'll consider joining the discussion over there as we've posted the questions and opened the comments to that now. I like your thoughts on Jake and the book!!

I wanted to thank you for this very well written review. I have been on the fence about this one, because I have been an avid Stephen King fan since I was a child, when my mother handed me The Eyes of the Dragon after I had complained incessantly that I had nothing to read, but then I have heard so many things about the quality of his writing changing in recent years with his last several novels since he found sobriety. I wonder if maybe the alcohol helped along the insanity that fueled his creativity. I think, after reading your review, I may read it just to see if I feel the same way.

Lisa, your comment reminds me of a line by Brian on Family Guy. It referenced a musician that kicked his drug habit, but his music quickly went down hill: "No junk, no soul."

I haven't read any Stephen King since Gerald's Game, but I do enjoy me some time travel. I'll give this one a few chapters next time I'm at the bookstore.

I'm unsure about this one. I don't read horror so I've never read Steven King and I know this one is not classified as horror. I love time travel, though. Will have to see. Thanks for linking to the Time Travel Reading Challenge page.

I've read this and my daughter's read most of it. We'd both tend to agree with your review. She gave up (though she says she does want to finish it just to say she has) because it just went on so long about his job, his love life and every little thing that happened in five years.
I finished it as I wanted to see how he was going to explain time travel working. He did and it worked (mostly) for me. Like you, I was interested in the personal question, though I felt he just gave up on things as well as decided that they were for the best.
I'm interested to read Under The Dome now to see how much better it is than this.