The Bone Magician (YA) 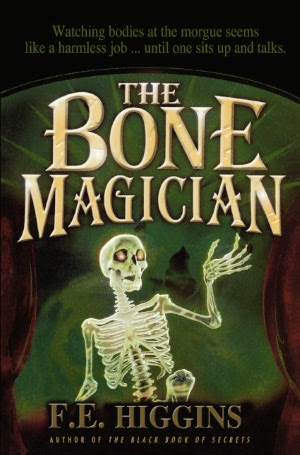 How I have come to hate this place of evil, this city of nightmares. Urbs Umida they call it, Dank City, and well it deserves its name. It has taken everything that was precious to me. But I shall leave one day, soon, when I know the truth. I shall pass through those gates and it would please me greatly to not look back. Imagine, never again to inhale the stink of rot and decay, never again to see despairing eyes in the shadows, and never again to hear the name Deodonatus Snoad or to read the lies from his poisonous quill.

In 2009, I reviewed F.E. Higgins novel, The Black Book of Secrets. And it was love. It really was. I fell in love with the atmosphere and tone created by Higgins. I just loved his writing. Sure it was a little over-the-top, but it worked really, really well. The way he created such quirky characters, how each quirky character had a name that suited them just so.

I was not disappointed with The Bone Magician. In fact reading the Bone Magician made me want to go out and reread The Black Book of Secrets. Not to mention picking up The Eyeball Collector and The Lunatics Curse.

So in this non-sequel, readers meet quite a cast of characters. The hero is a young might-as-well-be-an-orphan named Pin Carpue. (Pin's mother is dead; his father is just on the run, supposedly because he's murdered Pin's uncle, but Pin isn't really sure that is true and Pin's father could have just disappeared the day his uncle died by pure coincidence). And the heroine is a young girl with plenty of secrets named Juno Catchpole. I could tell you that readers first meet Pin after he's been drugged seemingly unconscious by Juno and her associates. I could tell you that Pin witnesses something incredible and unbelievable: he witnesses Juno 'raising' the dead corpse in the coffin on display at the undertakers. Or I could tell you about Benedict Pantagus, Madame de Bona, Deodonatus Snoad, Aluph Buncombe, or Beag Hickory. But I won't. I think the magic of this fantasy is in letting it surprise you.

I loved this one. I just loved it. I like the writing, the storytelling, the characterization. It is just charming and funny. True, the humor could be seen as being on the dark side. And perhaps dark dramas aren't usually considered to be all that charming. But in this case, it all works. It is not as dark and as creepy as the cover would have you believe. It is not a creepy-scary book. Even if it does feature the Silver Apple killer.

An example of the writing:


Whether or not Hickory Reds were the preferred choice of a potato thrower, it was certainly true that when it came to projecting medium-sized weighty objects through the air, there was no one to match Beag. It wasn't just the distance, you understand, it was also the accuracy with which he threw them.
Beag was a man with many talents and he had left his home village at a young age to see the world, to learn, and to seek his fortune. He was not going to let his lack of stature be an obstacle and by the ripe old age of twenty-four he had achieved two out of three of his fine objectives. He had certainly traveled extensively and had written songs and poems to prove it. Aluph was not wrong in saying he was an intellectual giant. Beag had acquired knowledge that few Urbs Umidians would believe, let alone remember, and he had forgotten more than most could even know. But on the third, the matter of his fortune, Beag had been well and truly thwarted. Of all the facts he had learned, the hardest had to be that there was no money to be made from poetry and singing. But perhaps there was a living to be earned from potato throwing. Certainly it was a talent that appealed to the stunted imaginations of the Urbs Umidians. (91-92)

Sounds interesting! One of the best parts of this challenge is finding new authors, new books, new series.

That sounds amazing - and dark fantasy - I'm sold. It's going on the list! But don't write about any more good books please!!!
Lynn :D

Whew, those are creepy covers! The excerpt sounds funny though. And I have to admit...I want to like Dickens, but don't quite. He's just such SLOW reading...

Charming and funny; great combo! I like the idea of the dark humour, so I'll watch out for these.

Natalie~Coffee and a Book Chick said...

This is exactly why I adore these challenges! I never would have found this title without Carl's Once Upon a Time Challenge. I just decided to create a Pinterest board to collect the book reviews that spark my interest. Yours is the first on my board! I love audio books and found that it's also available as an audio as well!